All Renée all the time

I cannot explain my taste for these ridiculous pictures taken of the screen during the HD simulcast of the Met gala. 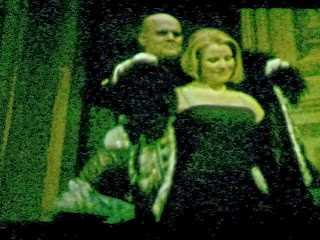 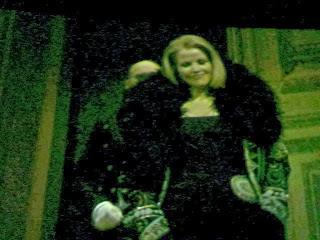 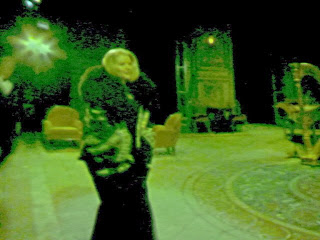 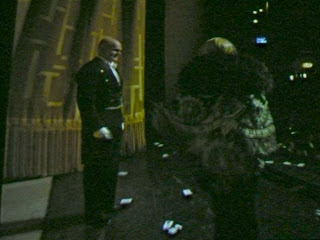 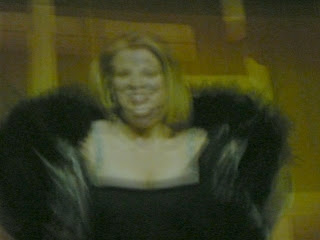 This one seems only to capture her basic Renéeness.

My only previous experience of such a gala was at the Washington National Opera where Placido Domingo did two parties (Fedora and Fledermaus) with the end of Otello in between. Barbara Frittoli as Desdemona sang more than Placido.

Renée bit off a much bigger chunk. All of her scenes--the country and return to Flora's scenes from La Traviata, the street scene and San Sulpice from Manon, and the end of Capriccio--were significant and intense. It was a night of important singing.

I have only heard Capriccio sung by Kiri te Kanawa, a singer who stuck carefully to her gorgeous legato and let it work for her. Renée reaches beyond, attempts significant acting interpretations of each role with interesting results. I laughed out loud (alone, I'm afraid) when she lay backwards over the prayer stool in her attempt to seduce des Grieux. Reminder of this bedroom posture seems to have done the trick. Her Manon just wants to have fun.

The Met went all out in its coverage, though there were technical difficulties at the start. We did not hear the narration for Renée's biography. We have Susan Graham to interview at the Met and Deborah Voigt interviewing in Times Square. Both were in form. Debbie's tactic seemed to be to interview people in Times Square who were fans of her own. This seemed to work well. Susie's interviewees were almost as flattering.

The Met of 2008 is an endless party, and Renée Fleming is the life of the party.

Crowds were decidedly down (compared to last year) at the Denver theater I attended. I'm guessing the old folks found the late-night start somewhat off-putting. It was tape-delayed to begin at 7:00 local time. From an opening crowd of apx 200, only about 50 stuck around for the final scene.

The opening went on FAR too long, and I thought Susan Graham's speaking voice grated on the ear. It's possible the sound in our auditorium was up too high, I suppose. During the intermissions, with the clock counting down from 15 minutes to zero, I wish they had sent their cameras into the Met gallery where the old photos and costumes were on display, rather than killing time by showing endless shots of the front of the hall plus the Times Square marquees.

Alvarez was superb (as always), and a delightful interview as well. Fleming's Violetta got off to a rough start (her first few phrases seemed unusually throaty), but she quickly recovered and sang that role better than the other two. Hampson is dangerously approaching Sam Ramey over-the-hill status (not quite the warble, however), and I'm truly sorry he didn't swap places with Dwayne Croft, who sings the Germont role much better.

I've never heard "Capriccio," and I guarantee I never will again. I know a lot of people love Strauss, but I think his music sucks. I thought that scene would never end -- and what was with the self-touchy-feely? Creepy, don't you think? Her German pronunciation was horrible, and I also thought the subtitles weren't all that accurate.

Wow. You must be missing blogging.

Ours must have been time delayed, too. Either that or it went on to 1:30 in New York. My memory says that it wasn't completely dark in Times Square at the start.