On Sunday afternoon I went to Berkeley to see The Tales of Hoffmann by the Berkeley Opera. The opera was present in the Julia Morgan Theater on College, a small venue, and was sold out. It was done in English in a new translation by David Scott Marley. The words sounded very natural and easy to understand. There was spoken dialog.

Hoffmann has four sets: the bar near the Nuremberg opera house, the residence of Olympia and Spalanzani, Antonia's house, Venice and a return to the bar of the opening scene. For the Berkeley production it was done in a single set with only small modifications from scene to scene. There is a long note in the program describing the edition used for this production. The three heroines are in the order Olympia, Antonia, Giuletta. 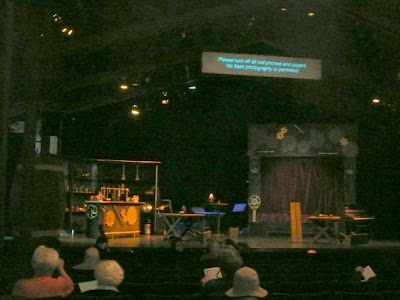 Nicklaus/Muse, sung by Nora Lennox Martin, sings more here than I remember. She has about three arias, if I recall correctly. Nora got better as she went along and in general made a good impression.

It is unusual for one person to perform all four heroines. Olympia is a coloratura while Antonia and Giuletta sing heavier music. I only know of Beverly Sills singing everything. In Berkeley Angela Cadelago did all four roles and did them all quite nicely. I loved her Olympia who sang the entire aria without moving her mouth. She has a soubrette-like voice and had to struggle a bit with the heavy dramatic music, but she managed it adequately. Her performance of Antonia's aria, my favorite part of the opera, was beautiful. She is both a musical singer and an excellent actress.

I was less impressed with Adam Flowers as Hoffmann. His list of credits would make him seem more impressive than he turned out to be. 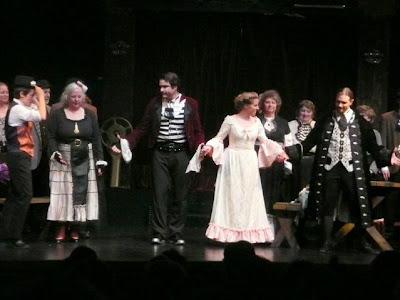 We saw a full-fledged adaptation based on posthumously discovered notes by Offenbach. It worked well for me.