Susan and Renée together again 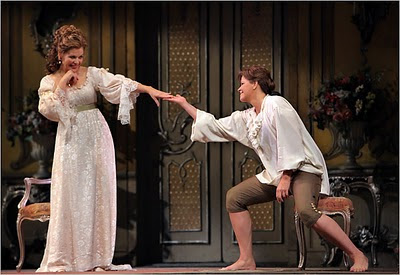 This picture of Renée Fleming and Susan Graham is from the New York Times.

Today I attended the Metropolitan Opera HD presentation of Strauss' Der Rosenkavalier. I am something of a Rosenkavalier freak. I'm even starting to understand all the words.

It is necessary to dislike something, right? Eric Cutler as the tenor was lame.

Placido Domingo was adorable as the host. He talked to Renée about her long friendship with Susan Graham and elicited the quote, "We used to say we were the only ones we kissed." Clearly opera singers spend most of their free time obsessing over their private lives, like everyone else.

The production is very traditional, one of those productions that is intending to show you what it really looks like. The Marschallin's bedroom, for instance, looks exactly like a period Viennese palace bedroom, complete with the heaters built into the walls. The skyline seen through the windows is really Vienna, though the viewpoint would seem to be entirely imaginary. The second act looks good but does not allow for Sophie's Duenna to look out into the street and see all the action she is reporting to Sophie. She looks very foolish prattling on about things she can't possibly know.

All the ancient Rosenkavalier traditions are followed. The chocolate looks exactly as it should, but comes with sugar tongs. Do people put sugar into chocolate? Everyone bows precisely to the Princess and backs out of the room. The chairs in act II are positioned exactly where they always are.

Now I've gotten all that out of the way and can talk about the performances. I hope I'm not required to be coherent. Towards the end I started muttering "wonderful" to myself over and over. It was simply amazing, the best third act ever. God is in the details, and there were too many details to take in all at once. I'll have to see it again.

What sets Renée Fleming apart from possibly everyone is her ability to actively relate to the other people on the stage. It is those eyes and reactions that bring the drama to life. The Marschallin is the greatest character in all of opera, and Renée played her as a living, loving, exciting woman. She is someone we know, someone who knows she is having an affair with someone too young to know what he really wants. The phrase "halten und nehmen, halten und lassen" (hold and take, hold and leave) is the plot of the opera. Take love when it comes and let it go when it leaves. She does this better than any Marschallin I have seen. Her third act is awesome.

It even worked with Ochs. "Komm' aus dem Staunen nicht heraus! Der Feldmarschall - Octavian - Mariandl - die Marschallin - Octavian. Bin von so viel Finesse charmiert, kann gar nicht sagen, wie." (I will never get over my astonishment. The Fieldmarschall, Octavian, Mariandl, the Marschallin, Octavian. I am charmed by so much finess, and can't really say how much.) They look one another in the eye, and we see for the first time that this admiration is completely sincere. Perhaps they will see one another again, and he will ask once more for her protection.

I have seen Susan Graham in quite a few pants parts, and I must say Octavian is her masterpiece. She has the big ungainly body of a seventeen year old and moves around in it with the same insecurity. She seems completely natural. Often women playing young men seem to be a parody of a man, but Susan's Octavian is real. She is the perfect real partner for this most real Marschallin.

Someone at the Met is creating this magic. Someone is leading these already magnificent singing actors to produce the performances of their lives.

A great Rosenkavalier is a feeling like nothing else, something one wishes one could hold on to forever. Thank you, my darlings.
Posted by Dr.B at 8:28 PM