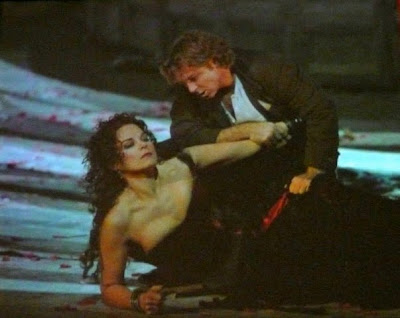 Well, maybe, just maybe I never have to see another Carmen again. I think my search for the perfect Carmen is over. My favorite thing was when Renée Fleming as our announcer for the HD broadcast from the Metropolitan Opera said, "Brace yourself." It's nice to be warned.

Elina Garanča has an inner coolness, and before I saw this performance I wondered how it would play against the character of Carmen.  Angiolina, the heroine of La Cenerentola, has a hidden heat at her core which for me didn't mesh with Elina. But Carmen is as hard as nails. She is very beautiful, very sexy and very interested in men, but inside is cool, powerful detachment. Don José never stands a chance. How does the character of Carmen play against the specific gifts of Elina Garanča? The answer is spectacularly well. And she is also the best danced Carmen I've seen. Renée couldn't say enough about her dancing. She also has one of the most beautiful voices around today and sang an extremely beautiful mezzo soprano Carmen. I know a lot of sopranos sing this, but I'm not sure why. If you still want more from your Carmen, I can't begin to imagine where you would find it. 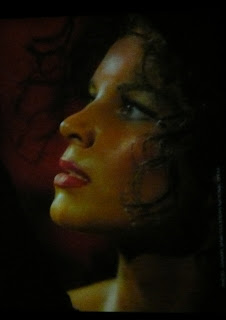 Teddy Tahu Rhodes stood in for ailing Mariusz Kwiecien as Escamillo on three hours notice. He was lovely and looked ready to fight bulls.

Roberto Alagna was her Don José. I suppose I should thank him for driving his wife so mad that she would drop out of the production. Roberto was the perfect heat for this cool Carmen. He is the good boy who fondles his crucifix passionately just before stabbing Carmen. The part is good for his voice, and he did some gorgeous high pianissimos.

The instrumental numbers were often accompanied by some lovely dancing. In the bar scene they even attempted a bit of Flamenco. For a rare change it fit seamlessly with the drama.

There should be special kudos for the coaching staff of the Metropolitan Opera, for both music and acting. If you look at the films available on YouTube, you would not have seen this coming.  More kudos for the conducting of Yannick Nézet-Séguin.

I was thankful for being warned. If this was your first experience of opera, you might spend your life searching for something this good. I am in awe.

No surprise that all fourteen Denver-area screens were sold out at least a week ago, and folks definitely got their money's worth today. This is the first time I've seen "Carmen" and feel strongly you're right about likely never seeing a better one. I still don't like Alagna's voice, but I thought he did a credible job except for that weird falsetto ending to the Flower Song. Rhodes was a pleasant surprise as a last-minute stand-in, although I'm sorry Mariusz couldn't go -- he was so terrific in "Lucia." [BTW, that's not an intentional non-sequiter.] Garanca sang incredibly well and she was right to be proud of her dancing and all-round stage movement.

14 in the audience would be fewer than the cast of Il Viaggio a Rheims.