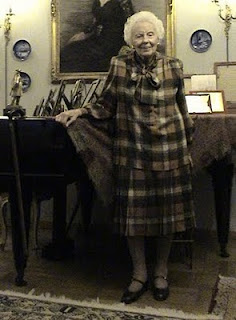 A grande lady of the opera becomes one hundred years old. Dr. Konrad Dryden had an opportunity for a conversation with Magda Olivero. Congratulations on 100! Selections from the interview.

Ms. Olivero, you have worked with some of the greatest artists of the twentieth century. As far as I know, you always had the best relationships with your colleagues. James King once said to me that you had been the only "lady" among his many colleagues. Plácido Domingo expressed about your appearance together in 1970 in “Manon Lescaut” at the arena of Verona that you, although you would have had your debut approximately 8 years before his own birth, so perfectly convincingly embodied the young title heroine that the enthusiasm of the public was almost frighteningly exciting.

At the beginning of my career I was still rather intimidated by all the great singers, who at that time were at the high point of their careers, in particular of Gina Cigna, who sang the Abigaille in “Nabucco”, when I made my debut in 1933 at La Scala in the small role Anna. The reverence that I felt opposite singers such as Cigna or also Ebe Stignani was something I had to learn to overcome. I sang e.g. in 1937 for the first time with Beniamino Gigli in “Manon”, and I was still quite shy when I got the offer in 1938 to sing Liù in the first recording of Puccini's “Turandot” beside Gina Cigna and Francesco Merli. I remember that we needed a great many takes at that time, since Cigna's voice already showed signs of overexertion. I sang my first Minnie ever in “La Fanciulla der West” on his express desire beside Giacomo Lauri Volpi. I had amazing luck to have had such marvelous tenors as partners as Franco Corelli, who already looked like the born lover. With my Violetta I let myself be inspired by Greta Garbo’s film version. I found it completely amazing how one cannot really recognize the exact moment of her death. And if a tenor didn’t completely correspond to the optical requirements for an Alfredo, I simply thought of Robert Taylor.

I still know exactly what my teacher always said: “Never copy! Make mistakes and correct them then, but make them with your own personality.” I miss some of my colleagues, who went on the long journey without return and have left a true gap.

What are some of the high points, if you look back on your career?

A completely special evening was my debut at the Metropolitan Opera in New York in the year 1975. Tosca was actually a role which I had difficulty understanding at the beginning. It was for me too bigoted and complacent. It was a marvelous experience, and the emotions that filled the house that evening are difficult to describe to someone who was not there. In the gala for the 100 year anniversary of the Met in 1983 unfortunately I could not participate, since my husband was at that time very ill. I sang Elle in Poulenc’s “La Voix Humaine” in 1978 in San Francisco in a wonderful production, which penetrated completely particularly deeply into the thought world of Cocteau. I sang, among other things, many contemporary works such as Einem’s “Besuch der alten Dame” which was terribly difficult. I was particularly in love with Mascagni’s “Iris“, an opera of very special beauty, and I was always particularly sad over the fact that Mascagni died before he could experience me in this role. Also to sing “Medea” in Dallas, where the spirit of Callas was still present everywhere, was a completely memorable affair.

What do you regard as the most important factor regarding the longevity of your career?

A good technique is the basis of every long career. Some see the principal reason for the length of my career in my retreat from the stage for approximately one decade at the time of the Second World War. However, I do not believe it can have contributed, because I sang a great many concerts during this time. My refusal to take on dramatic roles was perhaps a reason. I was very careful, when Tullio Serafin insisted at a very early time in my development on the fact that I sing Elsa. To achieve a correct vocal technique based completely on the breath requires great effort. Then I could go on the stage and perfectly concentrate on the character, as in a play. I did not have to pay any more attention to technique, which meanwhile had become second nature.

You created a singing competition two years ago.

I try to find the best voices. There are sufficient, but technique is unfortunately missing with many, which is very sad. I am frightened about the defects which are inherent in many of today's young singers: breathing, the support… Much seems to be unfortunately forgotten today. I believe that the reason why there are nowadays less and less large voices lies in the fact that technique is simply not sufficient any longer to let a voice mature in peace.

How will you celebrate your special birthday on March 25th?

Alone and peacefully with the family. However, I would like to thank the fans in Germany that still remember me. I am grateful for everything that they gave me. I would like to remain in memory to those who heard me as an artist who gave peace. This memory is a great gift, even as I live in the present and look to the future. I do not hold myself as a legend, only as a singer, who enjoyed her career with great love and always tried to give the best. God gave me the great gift to be able to become one hundred years old with many beautiful memories and with never ending enthusiasm.

[DrB] As usual, this is translated from Opernglas. I find this interview to be absolutely wonderful and wish I had the whole thing.
Posted by Dr.B at 3:29 PM