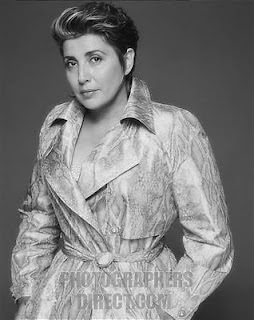 We are continuing with the Maria Guleghina film festival, this time with Verdi's Nabucco from the Metropolitan Opera 2001. Bizarre as this may sound, this is my first Nabucco.

Wow. This is serious screamer Verdi. With a date of 1844 it is also very early. I will have to adjust my ideas. This could only have been written by Verdi. It's full of staccato choruses, a Verdi signature, for instance. Dio. Here's a paragraph from Wikipedia:

"The soprano role of Abigaille has been perceived as the downfall of a number of singers. Elena Souliotis and Anita Cerquetti sang it before they were ready and its high tessitura arguably damaged their voices. Maria Callas sang it only three times; only a live performance from 1949 was recorded. Leontyne Price and Dame Joan Sutherland refused to sing it." 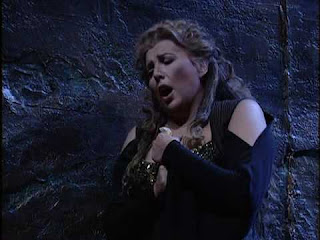 Well. Guleghina probably thinks Lady Macbeth is a piece of cake after this. There's a lot of shouting from the audience on this film and most of it is for Maria. I'm hoping she has abandoned this role never to return, but it is amazing to hear. Abigaille suits her better dramatically than Lisa. She's best in the major bitch parts.  She's very intense, but wimps out in the end, of course. We can't be having these uppity women actually triumphing in the end.

Samuel Ramey as Zaccaria already has a wobble, but it's not intolerable. Juan Pons is a lovely singer, but the role of Nabucco is also reasonably difficult:  now dramatic, now lyric. The whole opera is really so incredibly heavy.  But intense and exciting.  It's an excellent performance of an insanely difficult opera.

Verdi is following the lead of French grand opera and wipes away all thought of the lyrical bel canto composers. It's very clear why he made such a big splash. Eventually he came to his senses vocally.

There is an encore of "Va pensiero."  My eyes are opened.
#ad

As Abigaille, Guleghina is a pure zero, compared to Ghena Dimitrova.
Nabucco is one of my most favourite operas because I was fortunate enough to see it with Dimitrova. Yet if I had heard it first with Guleghina, it would have never become my favourite opera.