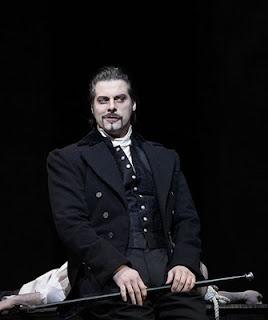 I am in danger of becoming jaded. I have seen some pretty amazing stuff this year, including some of the best French opera of my lifetime: Werther in Paris and Hamlet and Carmen from the Metropolitan Opera simulcasts. Werther in particular was quite staggeringly wonderful.

So here we are having to think of something to say about Gounod's Faust presented by the San Francisco Opera. Everyone says it's marvelous, so I guess it must be.

This is the opera the Germans insist on calling Margarite. I know this because I have a small German libretto amongst my collection of books. Faust is almost a secondary character. I listened to see if his name is ever spoken. People are constantly saying "Marguerite" but never "Faust." No one is worrying over Faust's soul, supposedly the whole point of the story.

The baritones saved the day. John Relyea as Méphistophélès virtually walks on water. I cannot get enough of him. He is sexy and sings like a dream. The best bit in the production is in the opening scene. Faust is whining away in a room full of corpses when one of them sits up, takes off his covering sheet and asks why Faust is so surprised. Nice. If he can raise the dead, what can he not do?

Brian Mulligan was an impressive Valentin. His aria in act one is my favorite part of the opera, and he was outstanding.

I was less thrilled with the rest of the cast. Why don't we just let it go at that.