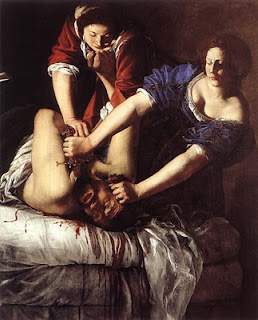 I hadn't realized that Artemisia Gentileschi was considered a follower of Caravaggio. The exhibition at the Uffizi is the first time I have seen more than one picture at a time. There is Judith cutting off the head of Holofernes, followed by sneaking the head out in a basket. She is the most interesting in these. The about 6 pictures all seem like self portraits.

Caravaggio painted a Judith. She seems to be saying "Oh ick!". Artemisia's Judith is all business.

Caravaggio painted from life, many think using the camera obscura, resulting in pictures that look like photographs.

Each person was painted one at a time, sometimes resulting in odd effects fitting them together. He used a single light source, and sometimes he filled in around the figures with objects or landscapes, sometimes just with black.

The followers seem to like just the single light source and the fading to black. Being a Caravaggeschi means realistic looking figures in black backgrounds. They look at Caravaggio and see a technique they can imitate. They miss the genius.
Posted by Dr.B at 10:03 AM