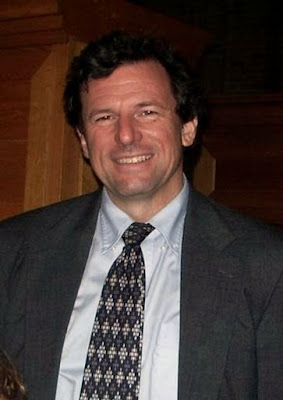 Florence is a small but very cultured city where almost anything can happen.

Monday night--everything starts at 9:15 in the evening so one is not required to rush one's dinner--at St. Mark's English Church in the Altrarno we were treated to an all Beethoven piano recital by Brian Marble from North Carolina.  First he did sonata in C, op2 No.3, an early piece that sounds a lot like Mozart on steroids, especially when Brian plays it.

This was followed by a fantastic, very muscular playing of the Hammerklavier Sonata.  At the time it was composed it must surely have boggled the mind.  What could be left to compose after this?

We are told that Brian broke four strings on his piano at home learning this.  His wife says she went home to Argentina for a month while he was practicing.  One might well love the Hammerklavier but still not want to hear it for days on end.

The program that came with the concert contained a lot of useful information.  The Hammerklavier Sonata is in four movements with the slow movement third and a fugue in the fourth movement.  It was written in 1818 at the start of Beethoven's third style period when the composer was already completely deaf.  It takes 50 minutes to play.   It is huge in every sense.  One should rise with the Hammerklavier.
Posted by Dr.B at 7:46 AM

Hi!!!! Mercedes here! Brian´s wife, yes.
It wasn´t that I went to Argentina while he was learning it, but that he started studyng it because I was in Argentina, visiting my family.
I never get tired of hearing him. I really enjoy his talent.
Soltanto per chiarire !!
I´m glad that you enjoyed the concert !!! It was a "wow" night!!
Un grande abbraccio!!!
Mercedes Marble

It was my favorite musical event of the summer.