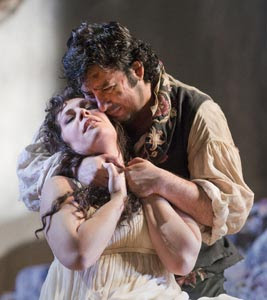 And what a cast it was:

I agree with Renée Fleming, the hostess--to assemble such a cast is an event. There was quite a bit of excellent information in the interviews. All the performers liked the rotating set by Charles Edwards because it allowed the action to flow without stopping for set changes. All the interviewees agreed that their character is crazy.

The plot was explained by Dolora Zajick. Azucena tries to get Manrico to kill di Luna to avenge her mother's death, and when he won't, she arranges for di Luna to kill Manrico. This makes her happy. I see it now. Opera plots are so sick.

Each singer was more wonderful than the last. Sondra Radvanovsky just gets better and better. Zajick owns her role. Marcelo is the most insane troubadour I've ever seen.

But my award has to go to the incredible singing of Dmitri Hvorostovsky. It doesn't get better than this.
#ad

When returning to my seat, fellow patron had her feet up on the seat in front. I said excuse me. She said say the password. I said Dmitri Hvorostovsky.

She said that was entirely satisfactory, and that I had pronounced it quite well.

Congrats on the pronunciation; it took the Beloved Flatmate and me some time to move beyond referring to him as Dmitri [consonants of surname in jumbled order with expressive hand-waving.]

The plot as analyzed by Zajick is chilling, but it's refreshing to have some method to the Trovatore madness!

She said something to me in Russian, but I don't know any Russian, except da / nyet.