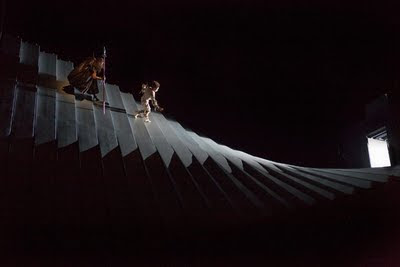 The Metropolitan Opera is still the place for Verdi with magnificent performances of both Don Carlo and Il Trovatore. It helps to make up for the terrible Simon Boccanegra last season. Also in the masterpiece category was René Pape's Boris Godunov. I am also happy that Susan Graham's Iphigénie en Tauride is preserved for posterity.

Just about everything else falls into the enjoyable if not exactly masterpieces category.

It is hard to evaluate the in progress Ring operas. The giant machine dominates the performances; in the case of Rheingold the domination was complete. It upstages everything and everyone. The idea is that we get a different set for each scene without stagehands coming in and moving things. Instead we get gremlins skulking around behind the set in black outfits trying to prevent catastrophe. (Is this comment cheating? They are far more obvious in the house than on the movie screen.)

And that is the problem, isn't it? We are always on the verge of catastrophe. I predicted the other day that before the end of the run someone would be killed. It wouldn't take much. The performers are all distracted by the lurking machine, though less so in Die Walküre.

I understand that when asked about the machine, Jonas Kaufmann replied that he liked the acoustic. It is a giant reflective surface that can benefit the singer's effect in the house. I guess that's a good thing.

I'm supposed to be rating the simulcasts. Rheingold came closest to bombing.

It's a good time to check your PBS listings -- Graham's Iphigenie is stating to show up on free TV. It will be shown here on the Sunday of Memorial Day weekend.