This is translated from Frankfurter Neue Presse. 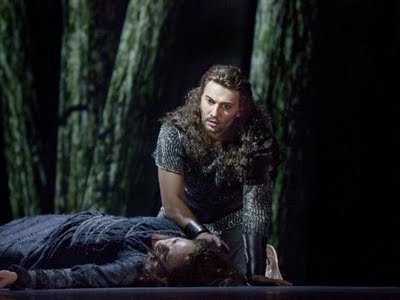 Some artists like the New Yorkers. Some like the audience in the world city very much. And some love them. Jonas Kaufmann is one of this last group. The young German is currently singing at the Metropolitan Opera the role of Siegmund in Richard Wagner's "Walküre" - and is celebrating a wild success.

"The Met is the Eldorado of every singer. All students dream of it - and now it's true," says the 41-year-old. As a child he listened to broadcasts from the legendary opera in New York City on the radio, now the pieces are broadcast worldwide in theaters - with Kaufmann. He is proud to be there: "The Met has always had a special call And it has this rightfully worldwide."

Kaufmann is not unknown at the Met. In 2006 he had his debut in "La Traviata", and last year he helped the newly staged "Tosca" to success that had previously failed with the public. "We simply changed it a little bit and had a lot of fun with it. But we had no idea whether this would reach the audience." It caught on: The second attempt was the premiere we have been waiting for, wrote the New York Times - and Kaufmann had left his footprint.

Now he is the star. While on the posters for "Walküre" is seen the world-class Welsh tenor [uh, bass-baritone] Bryn Terfel, who is known at the Met for 17 years. But the better reviews go to the German: "The audience fell in love with Mr. Kaufmann," wrote The Times after the sweeping premiere of the five-hour piece. "Good-looking and brooding, he embodies all the heroism and self-doubt of the uprooted demigod. His dark, structured and powerful voice has the ideal German color for this music." He was a true tenor, says the New York Times: "He had a great evening."

"Of course it's a great feeling when after the first act everyone jumps up and stands applauding," says Kaufmann. The New York audience was indeed very critical, but also enthusiastic. "Everyone here has the same chance, no matter whether one is a star with a great life of performance, or as a newcomer to the stage. If the performance is right, Americans are generous." Sometimes they are even frenetic. "On the west coast then you have the impression you’re at a pop concert. There are scenes of which we would say in Europe, that does not belong in classical music." [He's talking about Berkeley.  And maybe LA.]

This is Wagner in the city whose music scene is coined/shaped by Jewish artists, supervisors, donors and opera visitors, far from easy. Kurt Masur with the Philharmonic next door in Avery Fisher Hall already had to listen to criticism when he wanted to play Bach's St. Matthew Passion. Then in the middle of April he played “Les Préludes" by Franz Liszt - once the theme song of the Nazi week-show [Wochenschau] - said a Jewish concert visitor, Liszt was ok: "But I would never go to Wagner. Because he was really a Nazi."

"I have often dealt with this issue," says Kaufmann. "But you should be able to separate the work from the composer." About Wagner in New York he has never experienced any animosity. "But you can feel again what it means to be born in Germany and to bear this responsibility. With the generation that lived through the horror, however, I have every understanding."

Kaufmann's appointment calendar is full, even for the 2016/2017 season he already has commitments. Sometimes it is not easy for him and his wife, the mezzo-soprano Margarete Joswig, to have time for the three children. Life at home is sometimes determined by the intra-family democracy: "In the choice of music, we are sometimes overruled," Kaufmann says, sighing, "There will be ever Lady Gaga from the family Radio".

[Sentence fragments and other problems with the text are in the original.]
Posted by Dr.B at 2:03 PM

"Everyone here has the same chance, no matter whether one is a star with a great life of performance, or as a newcomer to the stage. If the performance is right, Americans are generous.", Kaufmann says. I don't really think so. In a way, it's kind of telling that he feels the need to say so, without being asked about it. I think it's very helpful to him that there's all this hype about him, his looks etc. I feel people get kind of blinded by his status and are much less critical of him singing Siegmund than they should. They "shouldn't" anything, by the way, it's all up to them, of course. But he really has this advantage. Listening to the audio live stream of the premiere, I wasn't really impressed with his Siegmund. Let's hope I can revise my opinion the 14th of May.