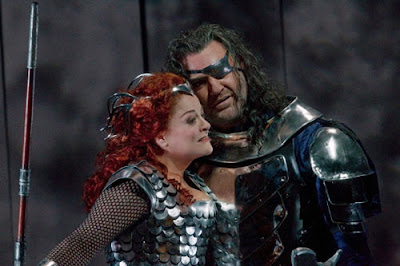 👍🏻
One of the joys of live opera comes from comparing the different perspectives many productions of the same work can bring to great works of art? Die Walküre last night at the Metropolitan Opera is more your old fashioned Wagner.

Working from story boards can lead you to see the work as a series of pictures. Deborah Voigt in particular was the perfect image of Brünnhilde. The log machine creates pictures which I begin to think look better in the house than on the big screen. In act 1, though, everyone was cut off at the knees. I especially liked the forest in act 2.

Or maybe it was just Eva-Maria Westbroek and Jonas Kaufmann as the fated twins I liked. They were a great pair, even looking a bit alike, and acting with style. I wish they had set a standard for the whole opera. There were no cute moving set bits in their scenes, and nothing to trip over, which may have helped.

Jonas was perfect--warm, romantic, gorgeous. I feel smug telling what an astounding Siegmund he turned out to be. In the house his singing sounded full and perfect for the tessitura of Siegmund. Sigh. 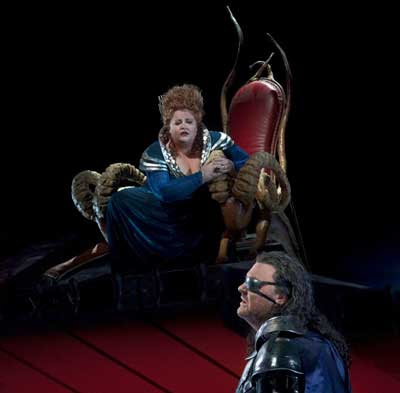 This is the first time I have believed the hype for Stephanie Blythe. In the role of Fricka her voice achieves the highest standards for a Wagner mezzo. This time her contract said not only no wire walking, but no walking at all. She sits in a chair, and all movement is by the machine.

The Hunding of Hans-Peter König was also outstanding.

Deborah Voigt looked wonderful, and the brightness of her voice cut easily through the orchestra. She flubbed the first high note. I wouldn't want to have to walk out on stage and throw off a high C first thing. No thank you.

Bryn Terfel. Let's just say he livened up a whole lot from Das Rheingold. He also lost his Veronika Lake hairdo. I liked him a lot more this time.

The staging of Wotan putting Brünnhilde on her rock was ridiculous. The drama is in the characters, and it is a great loss to sacrifice that to pretty, sometimes absurd pictures.

The biggest ovation was for James Levine. Every appearance these days seems like a miracle. I remember when we took his smiling face for granted.

I listened for Alex Ross' 10 measures. It all just sounds like Wagner to me, philistine that I am.

Glad you got your ticket, Dr.B. Sounds like a great evening.

Costumes must go. A girl who needs to be focusing on high notes and weaponry doesn't need to be worrying about her over-long skirts (especially around machinery). And that guy three seats to my left who blew is nose during the monologue...something needs to happen to him.

Try sitting next to someone who texts continuously on their i-Phone, sucks noisily on a plastic water bottle, swigs from a bottle of vodka, juicily consumes 2 nectarines, and smells strongly of alcohol, cheap perfume and slightly unwashed body. That was my most recent experience in the opera theatre, Xerxes in Auckland NZ.