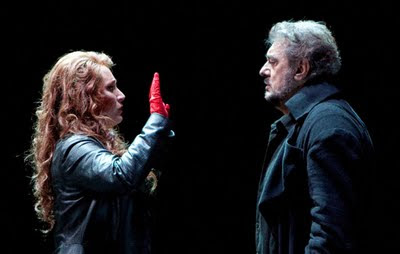 I never feel an overwhelming desire to see 10 performances of a run of an opera. After all, after 40 times of the same Vogelhaendler, what would be the point?

But different productions in different houses with different conductors and different singers can be instructive. After two times of Iphigénie en Tauride with Patrick Summers and Susan Graham (SFO and the Met) I was curious to see the version at the Washington National Opera with William Lacey conducting and Patricia Racette as Iphigénie.

This production was amusing bordering on silly. There were metal rungs on either side of the stage, and every now and then someone would climb them for no reason--including Patricia and Placido Domingo as Oreste. Domingo was lively and strong compared to his Met appearance.

There was a ballet ensemble consisting of two couples and a man wearing springy legs like you see at the special Olympics. Both the men and the women danced en pointe, a curious sight.

Most of the action was inexplicable. At one point the two Greeks enter, lie down on the floor, and have their heads massaged by two of the priestesses.

I was most fascinated by the musical differences. With Patrick Summers and Susan Graham Iphigénie is a stately piece, with long arching phrases soaring in the really quite beautiful voice of Susan Grahem. The effect is somber and significant

But the English have their own unique perspective, and the English conductor William Lacey wants lighter, quicker, more lively tempos resulting in a shorter, more exciting opera.

Patricia Racette's voice is edgier, louder, more intensely dramatic. Between them they entirely altered what you are experiencing.

One more thing: I have been here before, but I don't remember the singers sounding so loud. Usually how loud they sound varies from one singer to another. Not last night. Amplification?