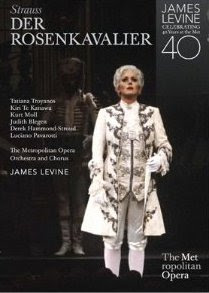 After decades of waiting, 3 to be precise, it is now possible to buy the magnificent Der Rosenkavalier from the Met in 1982, starring Tatiana Troyanos as Octavian, Kiri Te Kanawa as the Marschalin, Kurt Moll, Judith Blegen, The Tenor Luciano Pavarotti as the tenor with James Levine conducting.