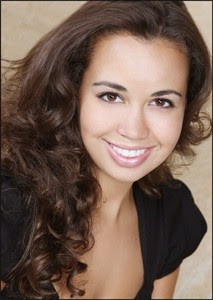 Nadine Sierra, whose Schwabacher Debut Recital was Sunday afternoon, already has her own Wikipedia page.  It tells us, "On February 21, 2009, she won the Metropolitan Opera National Council Auditions Finals in New York."  She was 21 at the time.

This season she is a second year Adler Fellow at the San Francisco Opera where she created the roles of Juliet and Barbara in the world premiere of Heart of a Soldier last fall.  It is interesting to note that in my review of the 2010 Merola Finale, her performance of the duet from Romeo et Juliette was the only thing I praised.

Enough blurb. If you read that someone has one of these opera prizes, you may assume that they have a big, penetrating voice, and that is very much the case with Nadine.

I don't go to all the Schwabacher Debut Recitals, but of the ones I've seen, this one is the most mature.  She showed off a lot of stuff.

She sang in four languages:  French (Debussy), Russian (Rachmaninov), English (Bernstein) and Portuguese (Villa-Lobos and Braga).   She is American, but her background is Brazil?

She showed off her interpretative skills in these wide ranging songs, and then topped it with her now very grownup rendition of "O mio babbino caro" as an encore.  She has improved on the YouTube film, so don't make any critical judgments based on it.

She showed off her very well developed technique, particularly her excellent breath control.

Her accompanist, Tamara Sanikidze, was chosen to talk about the Rachmaninov Opus 38 songs.  She is Russian, apparently, and loves these songs very much.  Artist bios never seem to tell you these vital bits of information.  The cultural background of the artist is crucial in understanding them musically.

Nadine is still young, but is off to a good start.  She is strong in the thing that for me counts most:  expression.  As she grows older, coaches will attempt to impose their interpretations on her, but let's hope her own personality continues to shine through.

Here's a nice sample of something from an opera.