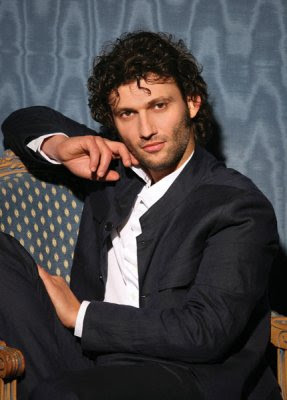 Poor Jonas.  He appears to have groupies.  I've certainly never had a groupie, but I have actually been one, so perhaps I can offer some insight.

He complains in The Guardian:  "They [write] things like: 'I was the girl in the fifth row with the glasses and you were only singing for me, and what are we going to do now?' It's amazing and sometimes frightening that you have the power and potential to, manipulate people in such a way."

He is having a bad reaction to this and says, "Yes, but sometimes I wonder what do they think that I am: am I really this evil guy, this sex monster like the Duke in Rigoletto, or the stupid guy, or whatever my role is? Of course not, I'm just pretending because that's what my job is."

I always tried to keep it tasteful, which may well have been an entirely futile effort.  Probably no matter what you say, it still sounds ridiculous.

It is best in these situations to remember Daniel J. Levitin in his book  This is Your Brain on Music where he says that rock stars get laid over 10,000 times.  k d lang always said that she became a singer so she could get laid.  They probably just think Jonas is like a rock star instead of the sensible home loving man he really is.  Perhaps it's not possible to write about this tastefully.

As a groupie, one is swept away by useless emotions, emotions that arise from the very real passion of the music, and if one is oneself young and attractive, one may wish for these emotions to play out in reality.  If they follow him home, he should definitely worry.  Adele lives in a mansion surrounded by a large open lawn with dogs because people do follow her home.

I think I assumed someone was hired to read the mail.
Posted by Dr.B at 12:04 PM