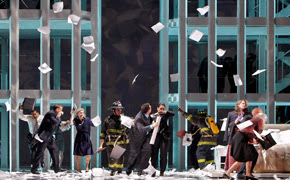 We stood and sang the "Star Spangled Banner" before the start of Christopher Theofanidis's Heart of a Soldier. In September, 2001, it was the beginning of the term of Pamela Rosenberg at the San Francisco Opera.  We first got to see our new General Manager when she stepped out from behind the curtain and asked us to stand and sing "God Bless America."

By the end of Heart of a Soldier we felt that we knew Rick and his friend Dan.  Some of this is due to the powerful portrayals of Thomas Hampson and William Burden.

The story begins when Rick and Dan meet in Southern Rhodesia and practice the ritual of gaining strength by wearing the blood of the dead lion.

Then there is the war lesson of protecting the person to your left.  The goal seems to be to do what you are told while keeping everyone alive.  It is the story of lives trained to withstand danger.  We are told to teach our hearts to be brave, and the greatest aid in accomplishing this is to sing.  The story ends when Rick leads his office-mates out of the burning tower, and then goes back to try to save others.

The heart of a soldier would appear to be a heart trained for duty.  We see how a hero is made.

The production enhanced the ever shifting setting--a bar in Rhodesia, a training camp in Georgia, a battlefield in Vietnam, and most vividly the two towers of the World Trade Center in New York.  From a strictly theatrical sense it is a triumph.  The text, the production and direction all combine to move us.  It is our 9/11 opera.

For me the music was nothing more than sound effects, timbre and little else.  A true opera should be mostly about the music.
Posted by Dr.B at 9:33 PM