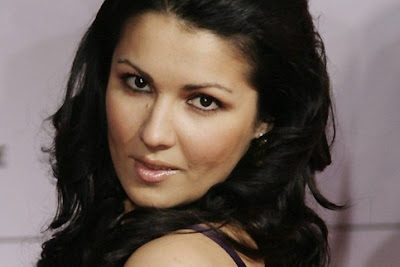 So maybe you didn't know she was gone.  I have been mad at Anna Netrebko because she refuses to diet off her pregnancy fat.  If you are one of the most beautiful women in the world, you have certain obligations.  Or so I thought.

So today in the New York Times I read that for the last couple of years she has been truly enthusiastic only for home and family.  I think my intuition told me this.  After all, one of the things we most love about Anna is her enthusiasm for performing.  Who but Anna jumps up and down in the final bows, or sticks out her tongue at the camera, or shows off her marvelous joie de vivre.

So (we are trying to start every paragraph with so) the New York Times seems to feel she is regaining her enthusiasm for performing.  She points out that she needs always new things to be singing to maintain her interest.  Anna Bolena is part of this plan.  She is at this moment pretty much the prima donna assoluta.

So she is also doing a recital at Carnegie Hall consisting entirely of Russian songs.  I went to a Netrebko recital years ago with Donald Runnicles accompanying, and concluded that the world did not need Anna Netrebko doing Lieder recitals.  After all we have a lot of perfectly excellent Germans for that.  What the world needed was an artist of Anna's stature singing Russian songs.  If not Anna, then who?  The passage of time has proved me right.  As the years pass, I begin to feel moderately less arrogant, but I was still dead on on this one.

So perhaps the Netrebko is back.
Posted by Dr.B at 1:43 PM