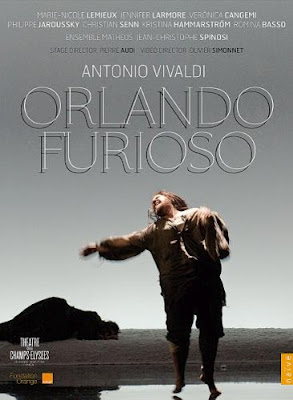 This DVD came unbidden in my mail.  Let's see.

Recently has come the news that a new/old manuscript by Vivaldi has been found in Turin that has proved to be a completely different Orlando Furioso than the already known one that this DVD is based on. The new/old manuscript dates from 1714 and has a baritone for the lead character. Maybe some day soon we will see that one.  I digress.

As if we weren't confused enough, this opera is one of those Baroque love plots.  Angelica and Medoro are in love, but Orlando also loves Angelica.  Ruggiero and Bradamante are in love, but Alcina also likes Ruggiero.  Orlando goes mad and havoc ensues.  You would only put on this opera because you had a coloratura contralto capable of endless rage arias.  I've seen it with Marilyn Horne, and she was outstanding.

The singers in this video are youthful and vigorous in their seemingly endless coloratura.  The production is period and set in a ramshackled castle.  The colors are dark and also the emotions. The men are mere pawns of Alcina--no surprise--and Jennifer Larmore is deliciously evil in the part.  The part is slightly low for Jaroussky, but he sings it beautifully anyway.

The intensity is surprising and builds to the end.  Besides Jaroussky I think I like Kristina Kammarstrom best.  Any discussion of singing in the Italian Baroque must consider this.  I think the virtuosity of this period is outside our awareness, since for us Baroque opera is the German Handel.

They are all amazing.  Orlando rants occasionally in French.  The period costumes emphasize the madness of Orlando.  She plays it for pure madness.  Bravi.
#ad