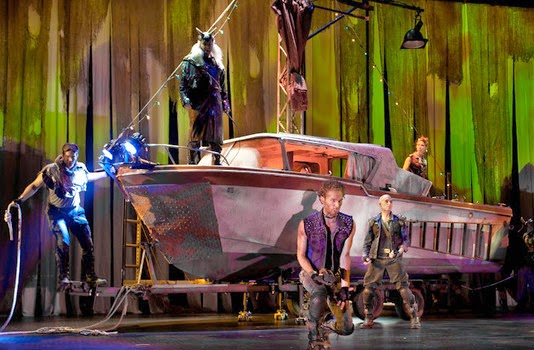 Friday night I attended a strange mash-up of Poulenc's Les mamelles de Tirésias (The breasts of Tiresias, 1947, sung in French) and songs from Weill's Mahagonny Songspiel (Little Mahagonny, 1927, sung in German and English) presented by Opera Parallèle in San Francisco.  I'm not sure it's possible to explain this, but I'll have a go.

Both of these classic twentieth century works are intensely political, but the politics is hard to translate to our time.  Each has a significant librettist as well.

The French poet Guillaume Apollinaire wrote a play called Les mamelles de Tirésias which forms the basis for the opera.  The play was written in 1903 and first performed in 1917.  After wars it is common to start political campaigns to encourage having children, especially after WWI where so many young men died. (Strauss' Die Frau ohne Schatten (1917) is also such an opera.)  The opera was first performed after WWII.

The play concerns a young woman named Thérèse who wishes to have the free life of a man.  Our heroine appears attired in high red boots and a giant red bra with huge breasts made of balloons which she removes and lets float into the air.  She strips down, takes off her red boots, grows a beard and changes her name to Tirésias.  As a man she achieves a number of high offices in the country.

Her left behind husband decides he still wants to have children, and clad in the same red boots and red bra by sheer force of will produces over 40,000 of them.   It becomes politically correct to make babies so Tirésias turns back into Thérèse and her husband takes her back.  "But you're flat as a board!"  This was all charming.  Rachel Schutz was excellent, and I rather liked the gender bending husband played by Gabriel Preisser, too.

Surrounding this work were the songs from Mahagonny Songspiel, usually in German with the hit song "Moon of Alabama" sung in English by Jessie and Bessie.  The significant librettist for Mahagonny Songspiel was Bertolt Brecht, a notorious leftist who got Weill in trouble with the rising Nazi movement, resulting in Weill emigrating to America.  So he writes this significantly anti-American piece called Mahagonny and then he emigrates to America.  Huh!  [Badly written, uninformed paragraph.  Weill was Jewish and didn't need additional reasons to leave Germany and eventually the rest of Europe.]

In our mash-up we are somehow in a waterless future.  There is no water to float the boat so it is wheeled about the stage.  The men's roles appeared to be a lot of work pushing the boat around the stage and climbing in and out of it.  Thomas Glenn shaved his head for this.

Did it work?  I couldn't connect them, but enjoyed each individually.  They didn't quite get the correct style for Weill, but Poulenc was fabulous.  So no.

This group is wonderfully imaginative and a lot of fun.  We still think they could do Ainadamar over and over.  Whatever they choose to do next, I can't wait to find out.

Twitter suggests this film with Francis Poulenc at the piano and Denise Duval.