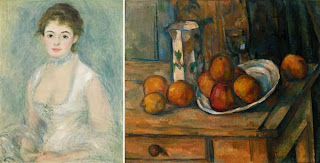 I have had rather a busy weekend.

On Friday I went to the Legion of Honor in San Francisco to see Intimate Impressionism, an exhibition of small paintings from the collection of the National Gallery of Art in Washington. The exhibition covered the broad spectrum of artists of the period, but there were no blockbusters.

Then in the evening I went to the Weill-Poulenc mashup reviewed here.

I drove home in the morning in time to make the Cosi fan tutte simulcast, but I quickly tired and went home.  After all, I've already seen this opera twice this year.  One goes to see how the ending is done.  Does anyone but me notice that men are never expected to be faithful?

Then on Sunday I attended a Capitol Chamber Players concert.  They are noted for their varied programming, which this time included:

Tchaikovsky's None but the Lonely Heart (I always want to hear the original Goethe poem.)
Lawrence Frank's My Favorite Oregon Scenes (world premiere)
Lee Hoiby's Last Letter Home
Samuel Barber's Dover Beach
Mozart's Quartet No. 17 "The Hunt" (Must be the corniest piece ever written by Mozart.)
The vocals were by James Gentry.

Monday I viewed a little over half of the stream of Antonio Pappano at the Academia Nazionale di Santa Cecilia in Rome.  They played a program consisting of parts of Beethoven's Fidelio, all of Il Prigioniero by Luigi Dallapiccola, and Beethoven's Ninth.  I was sorry to have missed the beginning of Il Prigioniero.  I find Dallapiccola to be a vastly underrated composer that I would certainly like to hear more of.  The opera, however, was originally written for the radio and is far too static to be completely successful theatrically.  The Ninth was exciting but fast almost to the point of frantic.

I tuned into this stream because there was someone else there whom I also would like to hear more of:  this year's Opera Awards male singer winner Stuart Skelton.  I will try to catch the rest of the program to hear his Fidelio.  He was great, especially in the Ninth.  "Wie ein Held zum siegen."

Then Monday afternoon American Bach Soloists came up in my Facebook feed.  "Oh s**t.  That's tonight."  So off I went to Davis for a choral concert.  Jeffrey Thomas, the director, is a choral guy so it was bound to happen eventually.