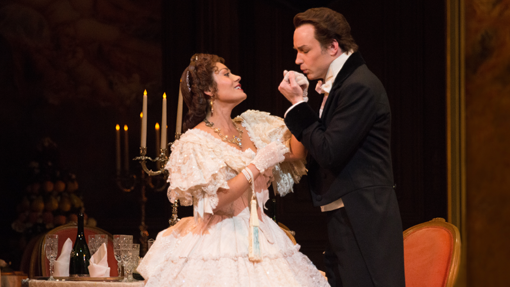 This all American trio set the stale war horse La Traviata ablaze at the San Francisco Opera.  They were supposed to be the second cast, but why completely escapes me.  My feeling was that we were lucky to have them.  I switched my ticket to see them.

Quinn came close to equaling my favorite Germont, Thomas Hampson.  For me the perfect combination is a warm tone and warm heart.  This was beautiful and strongly emotional singing.

Stephen Costello was best in the final duet where they sing of Paris.

But I was here for the rising star of opera Ailyn Pérez.  She has beauty of voice coupled with excellent penetration.  She was never covered by the only occasionally too loud orchestra.  She is also beautiful and an excellent actress who acts with both voice and body.  There is great depth already in her interpretation of Violetta.

I felt happy just to have been there.

My one negative thought was about the strange claustrophobic sets.  I don't know how all those women in gigantic skirts made their way in and out.

I don't usually go on a Friday night and was rather amazed to see the full house absolutely packed with attractive young people.  I hoped they were all there to see Ailyn.
Posted by Dr.B at 6:07 PM