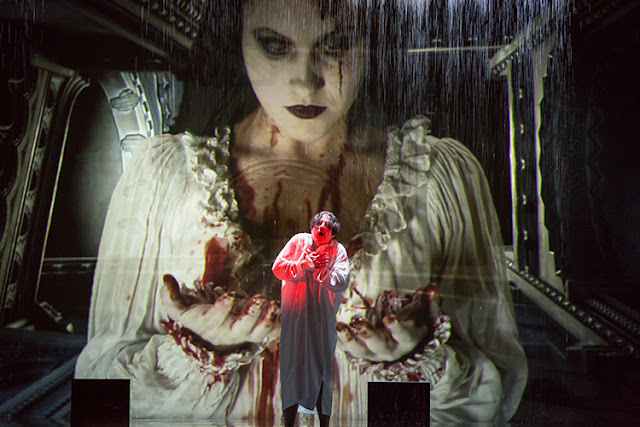 The San Francisco Opera presented a double bill of Gordon Getty's Usher House and Claude Debussy's La Chute de la Maison Usher (reconstructed and orchestrated by Robert Orledge).  In 2014 these two operas were presented together at the Welsh National Opera in Cardiff, Wales, and our production, which consisted mostly of projections, came from there.  Both operas are based on a short story by Edgar Allan Poe, who appears as a character in the Getty work.

The best possible description came from a friend, "It's like a B horror movie."  So people who like B horror movies liked it, and the rest of us are not sure.  There is one qualification:  the wonderful soprano aria at the beginning of the Debussy could be taken out and performed as a concert aria.  I loved it.

Of the two the Getty was the more dramatically viable.  It seemed to have a plot.  The Debussy was an extended rant by Roderick, very well done by Brian Mulligan.  This is Brian's season--we have seen him in Lucia, Sweeney Todd and this.  He's done some quality work.

I noticed a peculiar feature in the Getty:  virtually every phrase ended in a rise in pitch, sometimes as much as an octave.  The last note of the phrase is, of course, the hardest to sing, making this work something like a mine field.