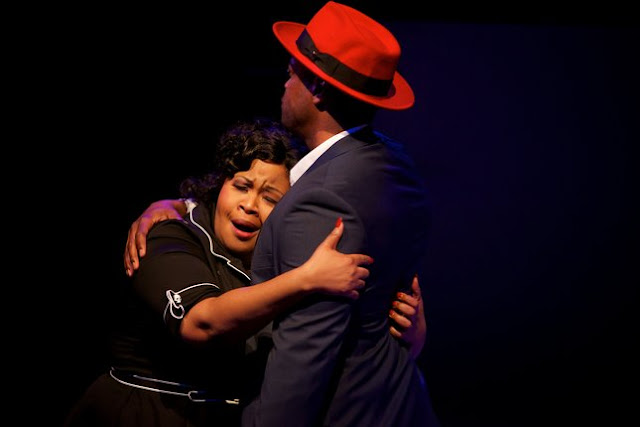 I attended the opening of Champion last night at the SF Jazz Center.  I had never been in this facility and found that our seats were among the best in the house.  We could see and hear everything.  It appeared to be sold out.

This is a very complex work.  For one thing three different people play Emile Griffith.  We see him in old age and experience his entire life through flashbacks.  This was handled with great skill and never became confusing.  The older Emile, played very emotionally by Arthur Woodley, was present on the stage throughout while his younger counterparts played out the story of his life.

Emile Griffith was a real person who became a prize fighter.  Please remember that even today the two richest athletes in the world are both boxers.   He became famous for having killed someone in the ring, or rather he put him into a coma from which he eventually died.

Theatrically it was very effective.  Scenes were announced by a Ring Announcer and the stage was bounded by the four corners of a boxing ring.  Kenneth Kellog is a physically impressive man who well suited the role of a major athlete.

I was very pleased to see that one of my rules for creating an opera was observed.  While the story is strictly speaking entirely about men, care was taken to give ample material to the female characters.  Karen Slack as Emile's mother had some lovely bits.

My only criticism is that it was somewhat long.  I enjoyed it a lot.  It seemed to me a work of love.