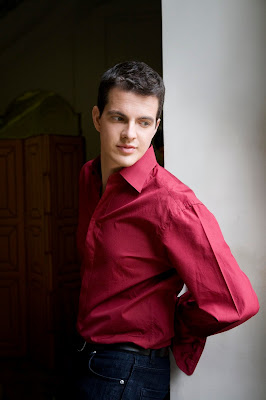 Philippe Jaroussky, countertenor, and Jérôme Ducros, piano, appeared May 12 for Cal Performances in Berkeley with a program of songs by Fauré, Debussy, Hahn, Poldowski, Bordes, Séverac, Chauson, Honegger, Saint-Saëns, and Chabrier, all in settings of poems by Paul-Marie Verlaine (1844 – 1896).  I don't recall anything like this.  This is a very high bar to set for oneself.

This type of song is called a mélodie, and is considered to have started with Les nuits d'été  by Hector Berlioz.  It's considered the French equivalent to the German Lied.  In a Lied the piano is sharp and angular, while in a mélodie we hear much more legato and almost impressionist playing.  Enough history.

The program was performed virtually without applause.  To elicit applause he would sing something more flamboyant and throw up his arms.  At the end it was a setting of "Chanson d'automne" by Charles Trenet, the composer closest to modern times whose song sound much like a modern pop song.  The rest of the time they immediately went on virtually without pause to the next song.  Short piano solos were interspersed while Jaroussky sneaked off to the wings.

The same poems appeared repeatedly with different composers:  "Green," "Clair de lune," "En sourdine," "Mandoline," etc.  It was deeply satisfying, a marvelous exploration of a style of music heard here almost only on recording.  It suited the sound of his voice.  Yes, we were surprised how much we liked it

The last encore was the most famous setting of one of these texts:  "L'heure exquise" by Reynaldo Hahn.