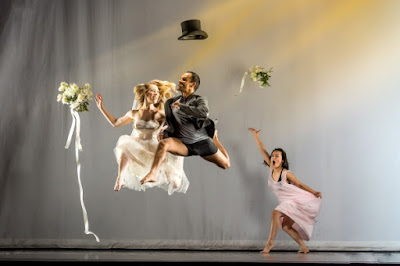 Last night I went to Cal State Sacramento to see Il matrimonio segreto (The Secret Marriage) by Domenico Cimarosa (1792), an opera buffa from about the same time as Mozart's Cosi fan tutte.  It also previewed in Vienna.  There is a lot of sexual innuendo such as one would find in Mozart but without the political sophistication.

Between Act I and Act II is a short Intermezzo:  Little Harlequinade by Antonio Salieri.

Carolina and Paolino have recently married but have not told her family about this.  Geronimo has arranged for her older sister Elisetta to marry Count Robinson, but when the count meets her, he doesn't like her.  He very much prefers Carolina.  Hmmm.  And if that isn't enough, Fidalma likes Paolino.

I very much admired how this was staged.  The cast of the Little Harlequinade are also Geronimo's servants who entertain us also in the overture and at intervals throughout the opera.  This was charming.  Since this is a student production, it provides increased opportunities for performing.

Paolino is also one of Geronimo's servants.  This explains why Carolina is so worried that someone will find out they are married.  Paolino follows his master from place to place throughout the opera.

A complex plot clearly and masterfully laid out, comic business of all kinds; who could ask for more?  The costumes were entertaining and contributed to the clarity of the plot.  They all live happily ever after.  I didn't see the need, though, for two people playing Geronimo.

Musically we have the same things we might find in a Mozart opera:  recitative (with maybe a bit too much talking), arias and ensembles.  The ensembles were especially impressive.  There was an extended scene for two basses.  There was a gorgeous trio for the three ladies of the family.  It is probably the frequent ensembles and comic pacing that make this Cimarosa's most lasting opera.

These are large roles well handled by the student cast.

When the overhead lights are out, I could read the supertitles.  When they were on, I couldn't.