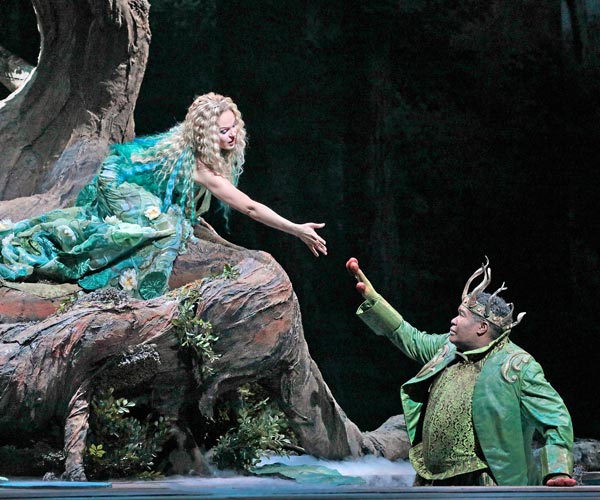 Dvorák's Rusalka was live from the Metropolitan Opera on Saturday. Many of the people around me had never seen this opera.  This is my fourth time with all the previous times starring Renée Fleming.

I was completely won over by the water nymphs at the beginning.  First they danced and then suddenly as if by magic they sang. 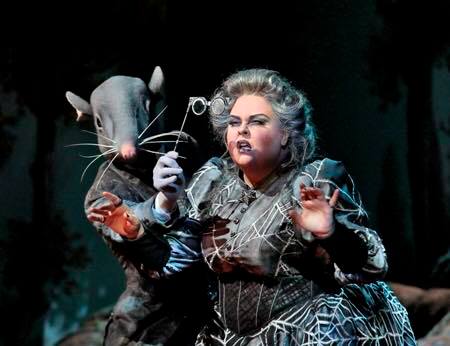 In case you thought after her appearance in Nabucco that Jamie Barton was boring, her Jezibaba was evil and fun and completely upstaged everyone else.  Except maybe the water nymphs.

Eric Owens owns the Gnome. He pointed out in his interview that this was his actual Fach while L'Amour is more a baritone role.

This is an excellent role for Kristine.  Someone has to step into Fleming's repertoire.  Her acting is far more intense than Fleming which changes the dramatic intensity of the opera.  Her voice is not really heavy enough for most of the roles she sings, but if she keeps this under control, it should be good for her.

I thought the castle sequence in Act II worked better here than other productions I have seen.  Brandon was the picture of prince charming.  I liked it but don't want to go on and on about it.  The Wagner loving conductor thinks it's one of the great post Wagnerian operas, but for me it's just ok. I tend to think of Dvorák as post Brahms rather than post Wagner.  Wagnerians ignore Brahms.

Matthew Polenzani was an excellent host.