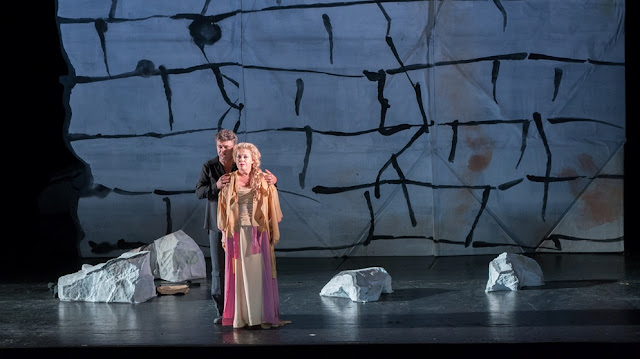 I was overdosed on television, so I waited until the second act to see Wagner's Parsifal from Munich.  The opera started off with the most discussed part of the staging, the fat suits.  Nina was not required to wear a fat suit.  Nor was Jonas.  But I did recognize Golda Schultz.  Most of the Dresden Amens which I always dislike are in Act I, so this turned out to be a good decision for me.

Many people commented that they loved the production, but I felt it explained nothing.  I liked very much the collapsing wall effect, but that was pretty much it.  No subtitles and a production that explains nothing didn't work for me.  Too many things were not portrayed, such as Parsifal baptizing Kundry.

The biggest applause, as always in Munich, was for Kirill Petrenko.  I'm not sure I want to write any more about this.  As a listening experience, it was fabulous.  Such wonderful singing and conducting.  It was an especially good role for Nina Stemme.  I loved her blond wig.  Thank you.