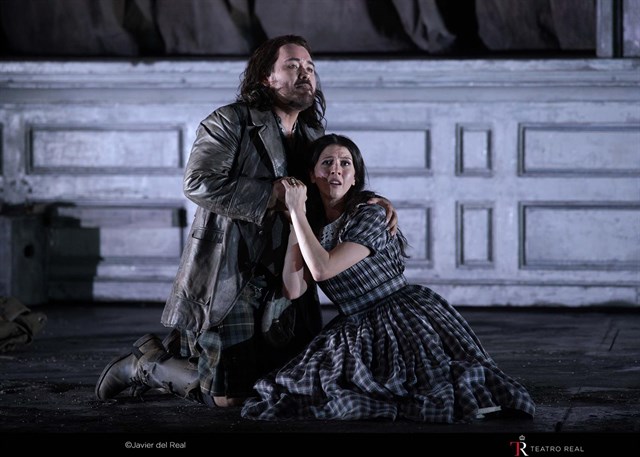 I've never actually seen a live bis in an opera before (they do them all the time in concerts in Italy, usually of something you'd rather not hear again).  When I realized what it was, I burst into tears.  And an ensemble, the sextet, on top of it.  I'm seriously loving this.  Everyone is a shit except Lucia.  She's already pretty insane before the mad scene.   We had a glass harmonica.

I am speaking, of course, of Gaetano Donizetti's Lucia di Lammermoor streamed live from Teatro Real Madrid.  The set is like your high school gym.  There's a radiator.  I think the theme is "you'd go nuts too if everyone you knew was this awful."  We're doing a play within a play.  At the end of the mad scene the chorus claps very slowly.  It's not at all like the loud shouting from the real audience.  The production does nothing to explain the opera but focuses entirely on the atmosphere.

The singing and for me also the acting were very good.  I love Lisette, but she will need to stay light in this role.  I came for Lisette and Javier, two of my favorites of the young singers, and they did not disappoint.  Javier wears a kilt in this, a first for me.

Lisette has also performed the ROH Lucia which I reviewed with Diana Damrau.  This version will be available on OperaVision for a while.  If you missed the live stream, watch it now.

I have to add a comment.  Lisette's physical training gives her a kind of absolute control over the phrase.  It's stunning.

I thought it was a totally incredible performance. It's just a shame that the live stream, as well as the Youtube posting at https://www.youtube.com/watch?v=LME3pH3tckU , is missing the first few notes of Act 2, the scene after the first Lucia/Edgardo duet. I've written to OperaVision asking them to fix it, and pointing out they may be able to do so from Teatro Real or RTVE as both of them also streamed it live.

As for the performance, I unreservedly recommend it, everything about it, including not one, not two, not three, but four excellent singers.

While I am a huge fan of Camarena, and he does do an amazing job in this role, restoring two unbelievable high notes for the role, one in the first duet and one in the Tu che a Dio at the end, both of which are almost never done, the fact is that Oropesa eclipses him in this performance. She is the finest Lucia I've seen or heard in forty years. And she drives the audience crazy. Yes, the three minutes of applause for the Sextet is shocking. But almost as shocking are the two minutes of applause after the FIRST HALF of the Mad Scene, Il dolce suono, followed by two and a half minutes of applause after the second half, Spargi d'amaro, even though all the principals remain on stage with the curtain up at that point. Oropesa has formidable talents, a perfect trill, extreme acuti that flow easily and clearly, and an ingratiating and persuasive presence that fits Lucia's character perfectly. They all combine to give us a total that is more than the sum of its parts, an overwhelming and almost-shocking experience of this masterpiece of an opera.

If you never see any opera video in your life, see this one; it's that good.

Thank you. I love Lisette, and it is her awesome stage presence one loves best.

Actually it cannot have been literally live because of the shortness of the intermission. In the theater an intermission is at least 15 minutes.

The film has been fixed and can be watched now without hitches on YouTube.