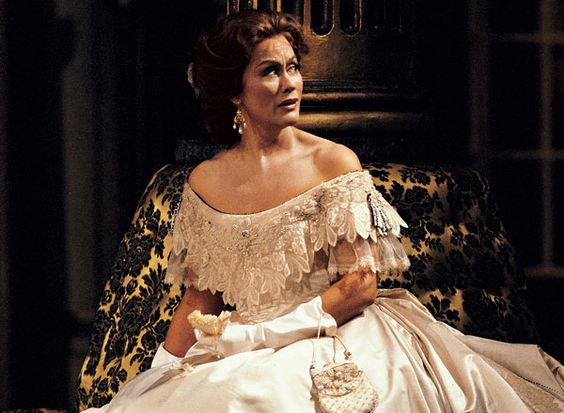 For my first full opera on my year of Met on Demand I have chosen Kiri Te Kanawa in Strauss's Arabella, I believe from 1994.

They have given her a handsome, passionate Mandryka in Wolfgang Brendel. I promise not to review everything I watch, but this has to be an exception.  This is by far the most traditional production I have seen for Arabella.  The world has changed, and I don't suppose there are counts and countesses everywhere anymore.  There is certainly no Austrian emperor today.  So a traditional production seems suitable.

It is fun to see Natalie Dessay pop in for a moment.

Arabella wants the some enchanted evening experience where you suddenly fall in love across a crowded room.  Mandryka is even worse.  He falls in love with a photograph.  The mystery of Arabella is the Zdenka/Zdenko character who falls in love with one of Arabella's suitors, a young man named Matteo who sends Arabella flowers every day.  She knows she has to marry money, and she knows he doesn't have any.  No one pays any attention to Zdenko/Zdenka, a girl pretending to be a boy.  She almost ruins everything.  She writes love letters to Matteo.  She seems almost invisible.  Even her mother pays her no attention.

For me I love to see the same piece performed in very different ways.  I probably saw Kiri in this in San Francisco, but now I am more familiar with the opera.  Kiri is at the sweet end of the range of emotions.  Perhaps Anja Harteros is at the other.