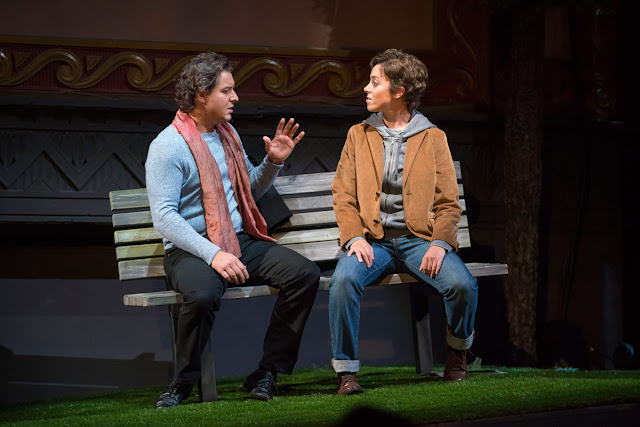 PBS has brought us Gluck's Orphée et Eurydice from Lyric Opera of Chicago with the Joffrey Ballet.  It's rather more like a ballet with three singers. If you are annoyed by the presence of ballet in opera, this is not the version for you.  In the French version of 1774 which we are seeing here Orphée is sung by a high tenor, called a haute-contre. Each time you see this opera it's different, apparently.

The outfits should tell you it's regie.  We are at a rehearsal, and Eurydice is late.  When she finally comes in dressed as a dancer, Orphée berates her for wanting to show off her stills, and she slaps his face and goes off in a huff.  Then she dies in an auto crash.  After lamentation, Amour explains the bargain he must make with the gods.  Eurydice will return with him from hell as long as Orphée does not turn and look at her.  He rejoices in a really quite spectacular coloratura aria.

Hell is a ballet with chorus. The entire opera is in a way a solo for the tenor.  I wish I liked him better.  I think I like the production.  It is an excellent idea for the Joffrey.  During a long ballet our tenor is holding a score to the Italian version Orfeo ed Euridice.  About 54 minutes in, after a long ballet, the soprano has her first singing.  She tells us how peaceful it is in hell.  The singers are sometimes choreographed into the dances.

I feel this opera requires a great star to pull it off.  The music is rather monotonous.  The resurrected Eurydice stays under her veil, and when he tries to remove it, she disappears.