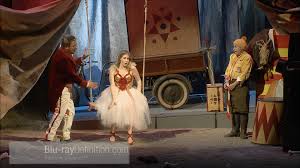 I tried to watch this version of Pergolesi's La Serva Padrona, 1733, roughly contemporary with Handel's Orlando, but it was just people standing around singing with no translations.  The music is charming, but I wanted to know what was going on.

So I turned to this DVD from Accademia Barocca de I Virtuosi Italiani.

We are at the beginning of the rococo.  This one staged the opera as though we were at a circus where Uberto was the manager and Serpina one of the acts.  She refuses to get his chocolate and then threatens to marry a nasty military man who will probably beat her.  The third character seems to be a mime.  The music is still charming with the usual mixture of arias and recitatives.  There was a huge war over this in Paris in the days when there was still opera rioting.  It had something to do with Jean Jacque Rousseau.  Serpina tricks Uberto into marrying her, turning la serva into la padrona.  From our perspective it doesn't seem like much to get excited over.
#ad