Les Troyens from the Paris Opera 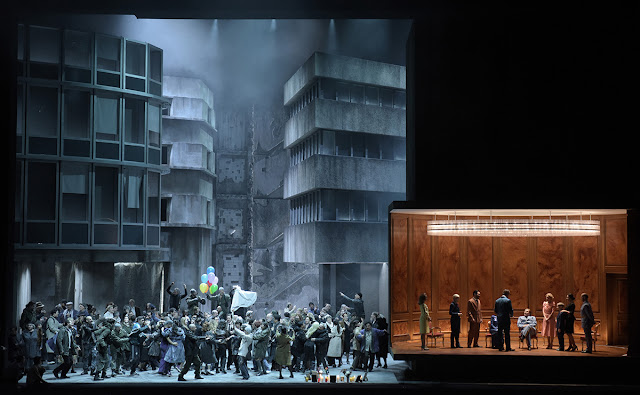 I am viewing a film of Berlioz' Les Troyens from the Paris opera.


The Trojans at Troy

Something like a movie marquee announces in French and English that the Greeks have abandoned their positions around Troy, and the war is over.  The streets fill with celebrators.  This is a regie production of Berlioz' Les Troyens from the Paris opera.  The characters are introduced with text at the top of the screen.  Priam looks a lot like Generalissimo Franco.  The billboard clarifies the action as perhaps never before.

I found Act I very coherent.  We don't see a horse, but the death of Laocoon is vividly described.  Cassandra warns and laments, but no one listens.

Where Act II should begin, we see soldiers with automatic rifles enter and shake hands with Aeneas.  Hmm.  So are we to believe he is a traitor?  His wife is dead and sends him a note explaining she is ashamed by his betrayal.  This is unclear.  Perhaps I have completely misunderstood.  His own people still seem to honor him.

Priam and his wife are shown dead.  Stéphanie d'Oustrac is wonderfully intense.  The men all head off and leave the women to die or be taken into slavery.  They choose death, and Cassandra goes up in flames.  I seem to remember a play by Euripides called The Trojan Women which describes a somewhat different fate for them.

This part of the opera is well presented. 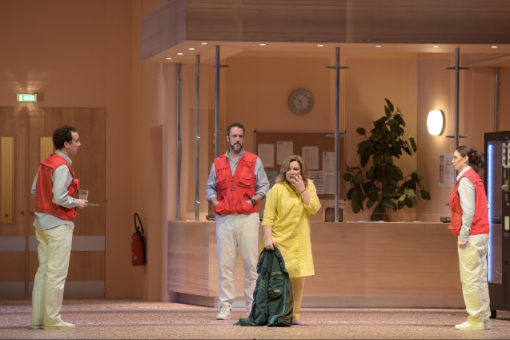 The Trojans at Carthage

A title announces that we are in a Psychological Center for Victims of the War.  The set looks a bit like a hotel lobby.  This is my third insane asylum opera after Carmen (also Tcherniakov) and Oberon.  This part of the staging has nothing to do with either Berlioz's opera or the staging of the first half.  Yes, people in war are often in need of psychiatric care, but the opera is about the triumph of Rome, not mental illness.  Perhaps it is better to just listen.  The audio is gorgeous.  This staging is definitely boo worthy.

I may never have realized before what a great opera for chorus this is.  Dido enters and the chorus holds up a homemade sign saying "Tu es notre Reine." [You are our queen.]  Aeneas's son holds up his cell phone to show pictures of Troy to Dido.  Ach!  One is interested in the translation because nothing in the visuals is giving you a clue.  I missed before that these people of Carthage are from the eastern Mediterranean, just like the Trojans.  That explains a lot.

A black guy comes in and Aeneas tries to beat him up.  Weird.  The essential feature of an insane asylum is the keepers who now enter in red vests and lead everyone out.  It is hard to imagine any other tenor besides Jovanovich playing this scene.  I'm determined to watch it to the end, but it gets goofier and goofier.

In Act IV the patients are in a circle, and enact a story.  They hold up signs to indicate where they are and what is going on.  The title of the story is "La Chasse Royale."  Perhaps you will recall that Dido and Aeneas go out into the country on a hunt.  "The forest" is next.  The audience for these signs appears to be Dido alone.  We have nymphs and naiads and satyrs.  When the sign says "The marriage of Dido" [you're not required to trust my translations], Aeneas is handed a bow and arrow which he waves around.  He shoots Dido's companion and Dido faints.  The arrow is theater, and the companion is fine.  We were wondering why they would give a mental patient a weapon.

Dido goes back to her room, and a ping pong table appears.  Two keepers in red vests then proceed to play ping pong and sing about triumphing over the Africans. These are Dido's advisers?  Oy.  They plot the marriage of Dido to Aeneas.  There has been nothing that even remotely resembles ballet.

This director seems to be under the impression that psychiatric treatment consists of arranging fantasy scenarios for the patients.  Problems arise because the patients react as though they were real.  This doesn't correspond to any therapeutic method I have heard of.  In a nuthouse apparently anything can happen.

When everyone else has left the stage, Dido and Aeneas sing a very gorgeous version of "Nuit d'ivresse," one of the most beautiful duets in all of opera.  The ending is kind of cool.