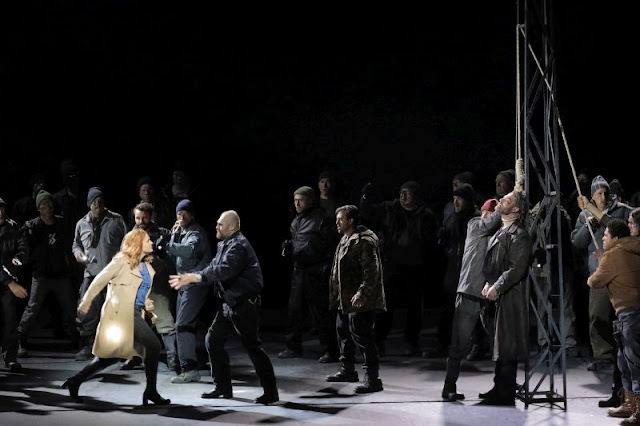 This is Puccini's La Fanciulla del West live streamed from the Bayerische Staatsoper.  I confess I love this opera very much.  This is the most Wagnerian of any Puccini opera.  There is lots of big singing and orchestration, but very little of what we would call arias.  At the end Dick Johnson sings a short aria just before they are about to hang him.  We are told Caruso insisted on this.

The production could also be counted as regie, but at least there are no balloons.  After proceeding in a more or less contemporary look, it just suddenly ends.  The curtain goes down with Minnie and Dick standing in front of it.  We proceed with the bows.  There were also no horses.  I missed them.

It looked consistently rough and drab.  The point of the story is that we are in an entirely masculine environment with only one woman:  Minnie.  There is an Indian woman who keeps house, but she doesn't come to the saloon.  So the time displacement didn't bother me since nothing definite was suggested.

This time the Sheriff Jack Rance is ugly and nasty.  This changes the dynamic.  It's no wonder Minnie rejects him. Dick would be more handsome with less facial hair.  This Minnie is the woman for all seasons.  She teaches the bible, cheats at cards, shoots, fantasizes a long term love, etc.  She projects toughness and treats each man as he deserves.

This piece is very hard to sing but worked successfully almost all of the time.  I enjoyed it.
Posted by Dr.B at 11:30 PM