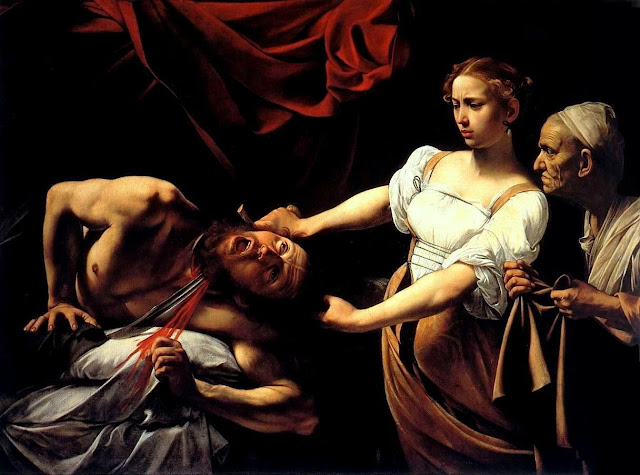 Vivaldi's Juditha Triumphans (Judith Triumphs) was streamed from the Dutch National Opera on Operavision.  My usual source book says this was an oratorio in Latin, here performed in Italian and staged as an opera.  Interesting.  The story is from the book of Judith from the apocrypha, as it is called by protestants.  All of the singers are female, including the chorus, because Vivaldi taught at a girls' school.  There do seem to be quite a few male supers, many in NAZI uniforms, and occasionally they sing with the chorus of soldiers.  Holofernes and his troops are Assyrian while the people in mufti are Jews from Bethulia.  The timing of the original performance in Venice suggests that it is translated into an oratorio about the Turks invading Corfu in 1716.  So 3 time periods.
The orchestration is astounding.  The same reference says: "The string orchestra is augmented by timpani, 2 trumpets, mandolino, 4 theorbos, 5 lyra viols (viols), 1 viola d'amore, 2 recorders, 2 chalumeaux (soprano) [ancestor of the clarinet], 2 oboes, organ."   I am hearing harpsichord.  Impressive.  It sounds much thicker than your average Baroque Italian orchestra.  In general Baroque scores don't show full orchestration, but to know more about these things, I would have to consult a Vivaldi specialist.

To begin we have the famous painting of Judith Beheading Holofernes (oops.  spoiler alert) by Caravaggio c. 1598.  People are shot.  Judith tries to persuade Holofernes that his power would be enhanced by clemency.

Structurally this is a Neapolitan opera with one florid da capo aria after another.  Maybe an opera would have more recitative.  The Assyrians are a bit creepy.  At about 1:40 the above painting is unveiled.  They are Nazis, so perhaps they are looting it.  This gives her the idea?  Yes.  She chops off his head.  At the end we are transported back to Venice, Judith regrets her deed and tears up the Caravaggio painting.

Musically this is a triumph.  The sounds are varied and fascinating.  We are hearing the real thing.  Vivaldi vocal music is seriously neglected by everyone except Cecilia Bartoli.