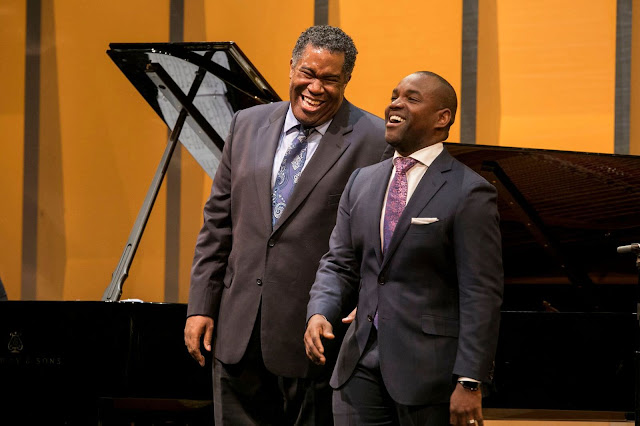 Lawrence Brownlee and Eric Owens came to visit at Mondavi to perform arias, spirituals, pop songs and whatever else they wanted.  They brought Myra Huang to accompany them on the piano.  She skillfully navigated the range of musical styles on this concert.  The whole concert was performed with the lid all the way up which sometimes worked and sometimes didn't.

The program was divided into two parts:  the operatic repertoire they are famous for and spirituals, pop songs, and gospel songs.  We'll begin with the classical.  The house lights remained up for this part.

Larry and Eric are at opposite ends of the male operatic voices.  Eric is a bass-baritone while Larry soars high above almost everyone in the coloratura tenor category.  Eric does Wagner and Gershwin while Larry does Mozart, Rossini and Donizetti.  There isn't a lot of overlap in their repertoire.

To represent his usual stuff Larry brought us:
This pretty much covers it.  The Donizetti arias are the main ones that receive encores these days, and he gave encore worthy performances.

"Una furtiva lagrima" came after they sang a duet from the same opera where the baritone conman sells the tenor a bottle of wine as a supposed love potion, "Voglio dire."  This is more fun when it's acted.

Eric sang
They finished with "Au fond du temple saint" from Bizet's Pearl Fishers, one of the greatest male duets in the repertoire.  I enjoyed all of this, but Larry in his high tessitura more successfully soared over the piano.

The lights went down for part 2.  The rest of the program started with spirituals such as Marian Anderson used to sing.  I thought of her when they performed a duet of "He's got the whole world in his hands."  This was her trademark song.  Eric excelled in "Deep River."

I didn't know all of the pop songs, but Eric Owens singing "Some enchanted evening" was wonderful.  The selection was puzzling.

They finished with two gospel songs.
It seemed like a concert as co-biography.  There was an encore but my memory has failed me.