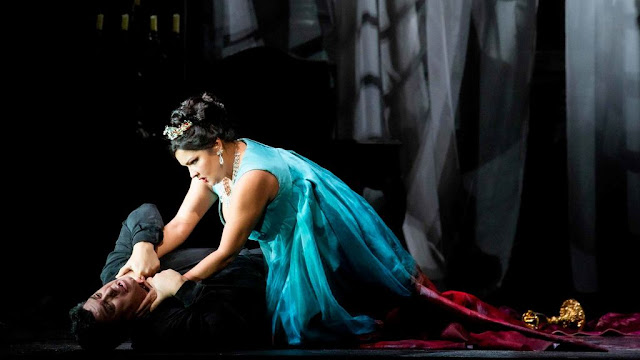 This production of Tosca for the opening of La Scala is constantly in motion.  All the required elements are in place when required, but after they swiftly disappear.  Why is this necessary?

Anna's Tosca may not be the best sung ever heard, but no one plays the diva to her level.  She knows how to flaunt her goods as possibly no other Tosca before her.  She is aided by the blocking:  after she has given a flower to the madonna, she later takes it back.  So it's the thought that counts?

The second act takes place in the Palazzo Farnese which in real life is decorated with elaborate wall paintings.  Instead of paintings, we have live people standing in boxes above the stage.  This seems exhausting.  If you were in the house, you might have missed this, but the cameras show mouths moving and so forth.  And when our girl is saying "mori" to Scarpia, she is choking him to death.  Three stabs were not enough.  She seems to regret it, though.

Luca Salsi as Scarpia is rather more friendly than I have seen.  I will assume that Netrebko did not complain.  He makes a wonderful, very slimy Scarpia.

Meli is ok.  He doesn't usually rise above ok.  He's cute.  There are a lot of gimmicks in this production.  In the end Tosca "goes to god" by floating upwards.  I'm not sure the gimmicks enhance the overall emotion.  I seem to always enjoy Netrebko.  I think it is her natural intensity.

I'm curious. How were you able to view it?

It streams all over the internet.

Act bows seem to be working their way back into the opera house. This refers to when the singers take bows, usually by entering through a gap in the curtain. They did it at the La Scala Tosca, at the Met for Die Walküre, and perhaps other places. It used to happen all the time, and had the purpose of allowing singers who appeared only in one of the early scenes to go home early.