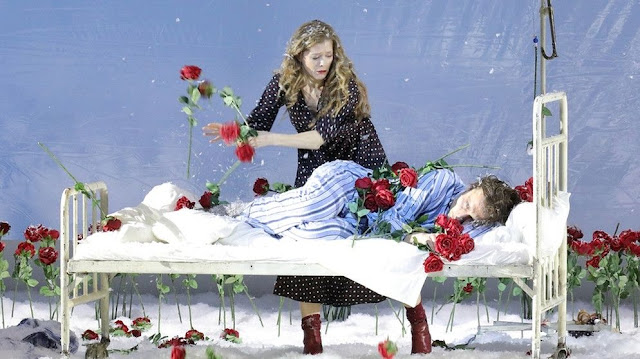 The Snow Queen by Hans Abrahamsen from Denmark was written for Barbara Hannigan.  This is her Fach.  It is more of a sound scape than an opera, though the singing, in English, is reasonably pleasant.  Hannigan can sing anything.  It is dated 2019 and premiered in Copenhagen.  Here it streamed live on Saturday from the Bayerische Staatsoper.

As soon as two nurses appear, we know we are in a hospital of some kind.  There is snow everywhere, even inside.   To begin an older woman is reading to children about a queen bee in the snow.  Then the story shifts to people.  Gerda is trying to rescue her husband Kay.  The Snow Queen is a baritone.  Just go with it.

The star here is the orchestra who create a rather fascinating mixture of sounds that never settle into anything tonal.  It's very heavy on percussion.

We move into the forest where Gerda meets two crows, a Prince and a Princess.  They tell her they will help her, but she must rest.  This music is very pleasing.  Gerda is looking for Kay who lies quietly and stares.  Gerda and Kay have known one another since childhood.  This is communicated by showing younger people at different ages dressed in the same outfits.  One of the younger Kay characters sings but the adult Kay so far only stares.  Where did they find someone who could go so long without blinking?  There is an uncanny Barbara Hannigan look alike who says nothing.

Each character has multiple incarnations, but only one of each sings.  That means that most of the story telling comes from the production.  You could stage this completely differently.

Did I like it?  It's rather like a long tone poem.  I wouldn't need to do it again.  Barbara Hannigan was her usual magnificent self.