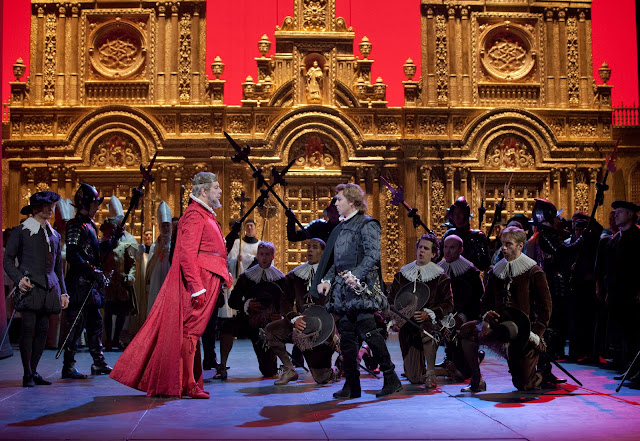 The Metropolitan Opera is treating us in our hibernation to some streams of marvelous past performances.  It is interesting to see these films again.  I am having very different reactions, Don Carlo being no exception.  I feel no inclination to compare Marina Poplavskaya to anyone.  She had a brief but glorious career.  She crossed my path only between 2009 and 2011. I enjoy her today very much.  I think she became a real estate agent in Manhattan.

The peak of Ferruccio Furlanetto's career is the great scene here where he laments that his wife does not love him.  It is a great opera with a great cast.  They are mostly giving us traditional productions.

Smirnova isn't that interesting in the role of Eboli, but she gives a barn-burning "O don fatale."  Each character has a wonderful scene.

This is the era of the Inquisition, and Spain was at its center.  They ruled over a protestant land and killed many people.  As political operas go, this one is at the top of the heap, with glorious music, great characters, and here a beautiful performance.