This is the list of HD broadcasts this season from the Metropolitan Opera shown in reverse order. Because the season was cut short, I saw only six operas. They were nevertheless an amazing set of operas.

👍🏻Agrippina by Handel. From 1709 this is the oldest opera ever presented at the Met. It Starred Joyce DiDonato, Kate Lindsey and Brenda Rae in a new production by David McVicar.  Considering the Met's lack of experience in Baroque opera, it was excellent. 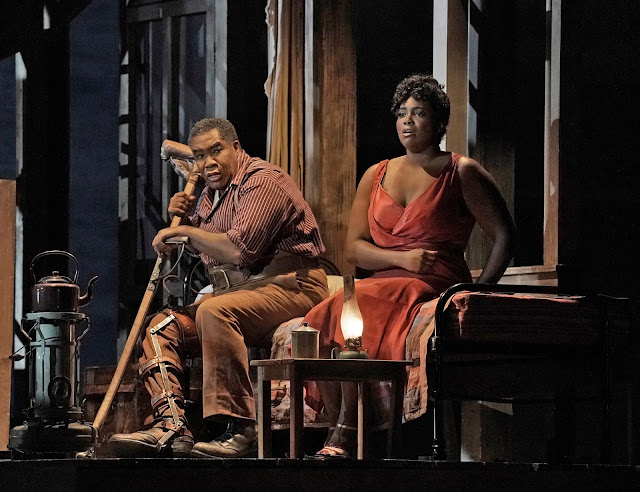 👍🏻Porgy and Bess by Gershwin in a new production by James Robinson, starring Eric Owens and Angel Blue.  This was an enormous hit.  Performances were added and encores of the live in HD were added in the following 2 weeks.

Wozzeck by Berg.  The William Kentridge production was new at the Met, but came originally from Salzburg.  Peter Mattei starred.  I had already seen the production which took some of the excitement out of it for me.

👍🏻Akhnaten by Glass.  Phelim McDermott created the very abstract new production.  It was long and included a lot of juggling.  I found it much more interesting than I thought I would.  In fact it was so popular the Met has arranged to bring it back in 2022.

Manon by Massenet. with Lisette Oropesa.  Revival.  This production by Laurent Pelly was new with Anna Netrebko. This is a good role for Lisette.

Turandot by Puccini. Revival of the ever popular Zeffirelli production. Christine Goerke and Yusif Eyvazov.  Perhaps I've seen this too many times.

All of these were very good, but one and two exceeded all expectations:
Neither one of these starred one of the great names of today, and neither one is a frequently performed opera.