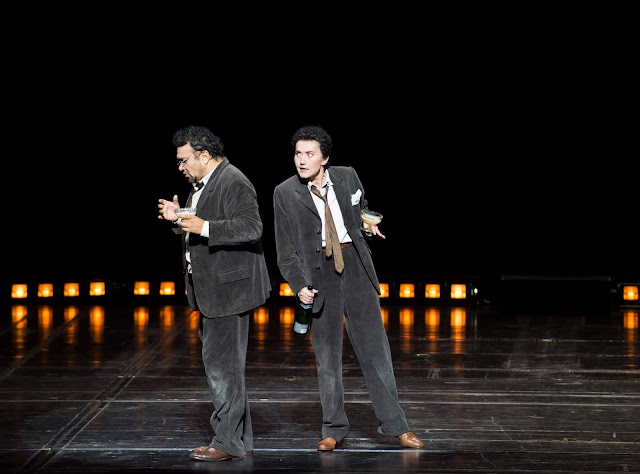 Our Olympia treats us to a bit of pseudo-nudity before being shockingly disassembled.  She is fun.

There are no titles.  This is what going to the opera used to be like.  Perhaps this is why opera has shifted its values toward the theatrical.  They used to just stand around singing.  Nobody really knew more than just vaguely what was going on.  Now everyone acts.

In the Antonia act we are in a theater orchestra pit, where she steals the conductor's score.  Her aria is my favorite part of the opera.  Her mother appears on the stage above, Antonia runs about trying to get up on the stage, and finally she succeeds.  This segment of the story is confusing.  In opera everyone sings all the time.  So Antonia is told if she sings she will die.  She sings.  She dies.  But how do we tell which singing is the singing that kills her?   The orchestra appears in the pit and the act ends.

Now we are in the audience of the same theater?  Nicklausse and Giulietta sing the barcarole from the seats.  The audience files in and begins making out with one other.  This is Paris where there seems always to be hanky-panky on the stage.  Being in the chorus there is a whole different thing.  We're supposed to be in Venice.

When all Hoffmann's loves are gone, the muse returns.  I loved only the one I came to see.  For the bows she changes quickly back into her Nicklausse outfit.  Enjoyable if not very romantic.