Fidelio from Theater an der Wien 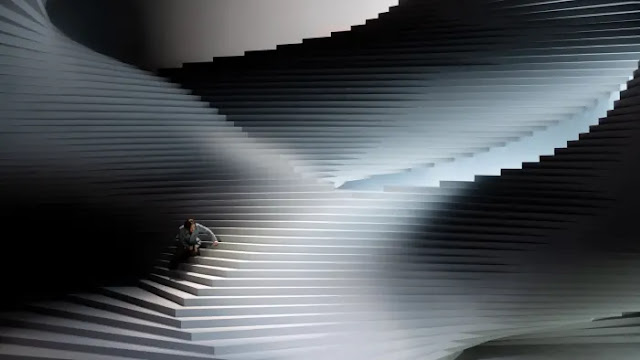 You could stare at this picture for hours and nothing about it would make you think of Beethoven's Fidelio.  This performance takes place in the Theater an der Wien (Vienna, Austria) where the opera made its debut in 1805.  This performance is of the 1806 version and was performed before cameras but no audience.  It was intended as part of the 250 anniversary of the birth of Ludwig van Beethoven.  It came to me via medici.tv.

Throughout the performance people walk up and down the stairs without falling down.  I am not able to forget the danger.  Seated on the stairs in chains is Florestan.  For some reason this picture which suggests nothing at all is never confusing.

The plot is not complex. Jaquino loves Marzelline.  Marzelline, who smokes and wears pants, probably to reduce the possibility of falling, loves Fidelio.  Fidelio isn't who he seems to be.  This is the liveliest staging of the opening scene with Marzelline and Jaquino that I've seen.  They are seriously fighting.  It's fun.  Except for the stairs.  These two young people are quite enjoyable.

There seems to be some confusion about Rocco.  He's Marzelline's father, I believe, but at the end when Florestan is rescued, they seem to blame him for everything.  It's my understanding that he just works there.

I love this opera and always know what is going on.  Someone with less experience would have to tell me if the staging worked.  I enjoyed all the singing, especially  Eric Cutler, Nicole Chevalier and  Mélissa Petit.