I Capuleti e i Montecchi from Zurich 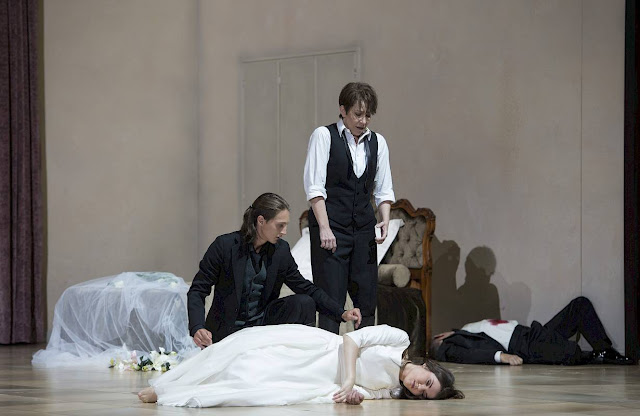 Everyone is streaming these days.  Today was Bellini's I Capuleti e i Montecchi from the Zurich opera in 2015.  Joyce performed this role in 2012 in San Francisco, but it is rather astounding how much more intense she is here.  There's something about watching opera two feet from your eyes that makes it seem more personal, more real.  Her Romeo here is intensely emotional, far more than the other characters on the stage.

Background tells us that there are two R&J operas:  Gounod's and Bellini's.  Gounod's opera is French and derives from the Shakespeare play.  The Italian Bellini designs his play around Italian history.  I previously wrote:  "We studied the Guelphs and Ghibellines in my class in Florence. The Guelphs, represented here by Giuletta's family the Capuleti, support the Pope, and the Ghibellines, represented here by Romeo's faction the Montecchi, support the Holy Roman Empire. So you see it isn't just two families that don't like each other. It's a war that went on in Italy from 1140 to 1289."

Christof Loy has made of this history a minimalist regie production with the usual black suits for all the male characters.  The women all seem to wear white dresses which we confuse with wedding dresses.

There is one other regie feature--The companion.  He's an androgynous figure with long hair who dresses sometimes in a black suit and other times in a black dress.  He says nothing but seems to fill holes in the plot.  When Romeo pulls a gun and tries to get Tebaldo to shoot him, The companion disposes of the gun.  When Giulietta needs lifting, he is there to do the job.  [Why do directors assume that tenors can lift sopranos?]

You want this opera for the music.  It is glorious here, beautifully conducted and beautifully sung.