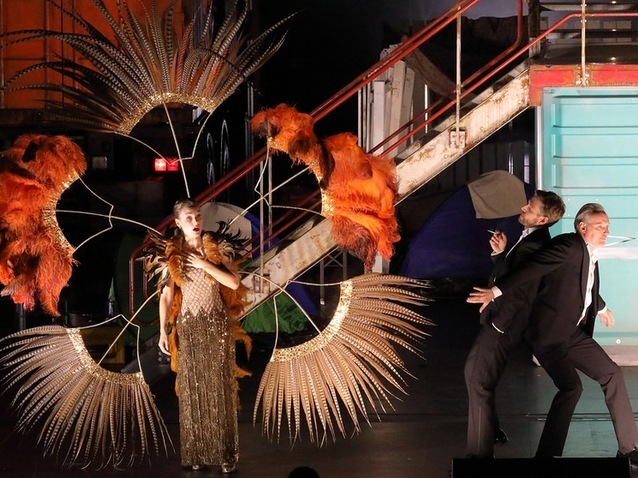 Die Vögel [The Birds], 1920, by Walter Braunfels, after Aristophanes, comes to me from the Bayerische Staatsoper München, Germany, from this year.  It's 100 years old and was popular in its day.

This opera appears to be about politics.  Two human guys, Hoffegut and Ratefreund, come looking for the king of the birds, Wiedhopf, to talk him into overthrowing the gods by building a city in the sky.  He was once a human and probably carries some of this desire for dominance with him from the human state.   The humans wear their regie uniforms of black suits.  The birds all have fancy feathers, including Wiedhopf.  The sets only suggest human life and never bird life.  It looks like a construction site, perhaps suggesting that building a city in the sky is already under way.

Spoiler Alert!  Aristophanes writes that the birds replace Zeus and become rulers of the world.  This band of birds fail in their quest.

I liked everything about the Nightingale, her voice, her costume, the music for her character, and so forth.  She is a modern day coloratura soprano.  Hoffegut courts her in an extended scene, but I don't think she's buying it.  Alfred Hitchcock makes an appearance.  You remember he had a movie called The Birds.  It's a horror film which this is not.  Briefly scenes from the movie appear.  Another reference is to a rock group called THE BYRDS poster in English.

A man enters in a NAZI uniform.  This appears to be Ratefreund.  There are long stretches with no singing which are filled up with political activities.  Two pigeons are to get married.  Clearly the opera allows for much range of interpretations, and this one is dark.  Perhaps birds and humans cannot cheerfully mix.

Finally a man with a gray beard is announced.  This at last is Prometheus.  Wolfgang Koch is magnificent in this role.  The dream fails.  They praise Zeus once again and return to the city.

The music is rather heavy neo-romanticism.  Only the nightingale brought lightness of feeling.  She returns at the end.