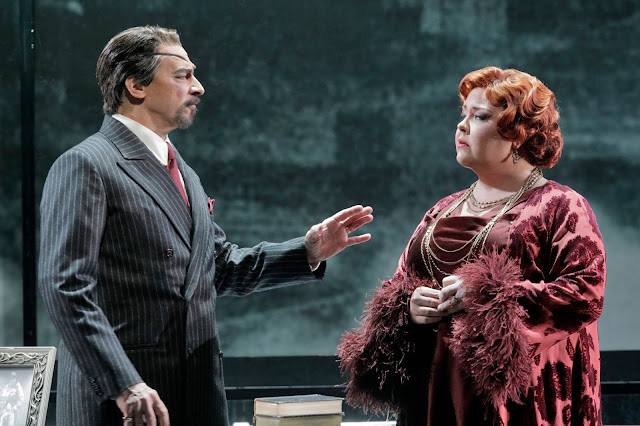 Die Walküre is of course the next installment in the San Francisco Ring.  Wotan lives in a skyscraper high over a relatively small city somewhat like San Francisco.

Act I is in Hunding's house which looks like an American house in the woods.  Inside is a cabinet full of sport trophies.  This Hunding is really a brute.  There's no question about whose side we are on.

Act II Scene 1.  is in the high rise built by the giants in Das Rheingold.  Jamie Barton is a truly magnificent Fricka.  She storms with great style.  He is clearly for Siegmund, but Fricka turns him to Hunding's side.  The goddess protects marriage no matter how bad it is.  There is lots of plot stuff in this act.  At the beginning Wotan orders Brünnhilde to defend Siegmund.  Then after Fricka's complaints, he reverses himself and tells her Siegmund must die.

Act II Scene 2.  In this scene Sieglinde and Siegmund are under a freeway, the latest symbol of urban wilderness.  Sieglinde has begun to feel guilt, both for staying with a husband who did not love her and for leaving him for Siegmund.  Brünnhilde enters and tells Siegmund he must come with her to Valhalla, thus at least attempting to fulfill Wotan's orders.  Siegmund says he will not go without Sieglinde.  This is all quite wonderful.  Brünnhilde changes her mind when Siegmund threatens to kill both himself and his twin even after Brünnhilde tells him Sieglinde is carrying his child.  The child must live.  I think we have here not at all the normal ending.  Hunding kills Siegmund, Wotan kills Hunding and Brünnhilde rescues Sieglinde.  Wotan just says to tell Fricka that he killed Siegmund, but he didn't actually.

Act III is the only part I remember vividly.  During the Ride of the Valkyries they enter on wires, which I see now are supposed to be parachutes.  I love this.  They are all wearing flying suits except Brünnhilde.

I just realized that Siegfried is a joining of the words for victory and peace.  One who brings peace in victory.  Forgive me Karita, but I long to hear Sieglinde in the voice of LD. Karita's performances always bring us her own personal intensity.

The Ring is very unliberated.  Where is Susan B Antony when you need her?  The gods can only imagine women belonging to men.  I enjoy Greer in many scenes, but he seems able to bring only anger into his voice.  And now I'm going to do what I criticize in others.  For me there is only one Wotan's Farewell and that is James Morris.  Greer has done well, but I want to hear the love bursting forth.  This is the only Wagner I truly love.  The ring of fire is perfect.