Lise Davidsen from Trondheim in Norway 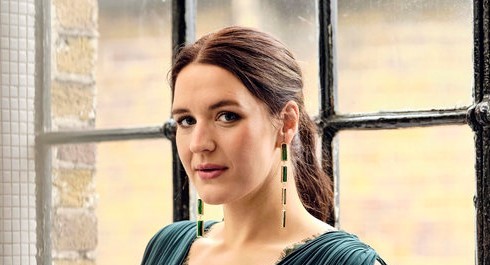 Lise gave a concert today from Trondheim with James Gaffigan who is their regular guest conductor.  The program alternated instrumental numbers and vocal numbers.  On Monday Lise gave an all Grieg recital with 100 in the audience. The Norwegian government reimposed the lockdown just before this concert.  There are more than no people here but maybe 10?  We don't get to see them.

It was nice to see so many young women in the orchestra in Trondheim.  Lise stays in the wings until just before she sings as though perhaps this were an opera. Each of her numbers is introduced by an instrumental piece by the same composer.  So we are hearing instrumental pieces by Verdi.  For the second Verdi she comes out in the break which is what is expected.  I have heard her sing the Verdi Requiem from a few years ago, but this is the most Verdi opera I have heard.  I think she will work her way into the Verdi heroines, and perhaps Don Carlo would make a good start.

The Beethoven and Wagner I have heard before, of course, but they are wonderful again.  This concert is all Lise sings big, which is what she is famous for.  I find her very exciting.

After the end of the concert, Decca released the new recording which can be found on lisedavidsen.com.  Only the third aria from the Thursday concert is from the new recording.  She is very wonderful and has a style uniquely her own.  Future things include a recording of Fidelio and a whole Grieg album.  Forgive me if I can't act like this glorious soprano is all new to me. James Gaffigan recommends being in the room with her.  I'm working on it.

James Gaffigan is very lively and entertaining in addition to being a good conductor.  I enjoyed him.