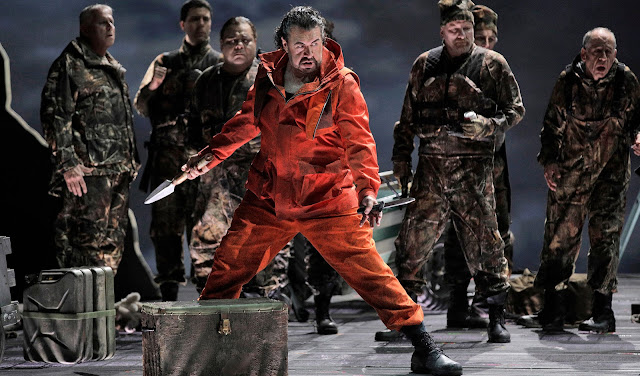 Götterdämmerung completes the Richard Wagner Ring cycle.  This is my first time for this production.

The balance between the orchestra and the three Norns is terrible. Why is this always such a problem?  Why don't properly placed microphones solve this?  Instead of threads, these strands of fate are fat electrical cables, and when one breaks, the Norms die.

We see Siegfried and Brünnhilde after their night together still blissfully in love.  He gives her the ring and goes off to explore.  The Rhein valley looks like a refinery.

Siegfried ends up at the posh home of Gunther, Hagen and Gutrune.  He has taken the tarnhelm with him and tells them where he got it.  He drinks a potion, falls immediately for Gutrune and forgets all about Brünnhilde.

Now we are back with Brünnhilde where she waits for Siegfried.  Her sister Waltraute arrives.  I like very much Iréne Theorin.  I remember that she was an emergency replacement.  I'm not sure I think Jamie Barton is a Wagnerian.  Waltraute tells Brünnhilde about how much Wotan has changed.

After Waltraute leaves, Siegfried returns with the tarnhelm on his head.  The other three parts of the San Francisco Ring had subtitles, but this one does not.  It's hard.  He takes the ring from Brünnhilde and leads her off.

Alberich shows up to lecture his son Hagen.  If the ring is so powerful, why doesn't it work for anyone but Alberich?  I have always wondered about this.  I'm trying to make it all the way to the end, but it's pretty rough going.  Gunther drags Brünnhilde onto the stage in front of a crowd of his subjects.  Siegfried has eyes only for Gutrune, and she for him.  Siegfried swears he doesn't know Brünnhilde, and she swears things, too, only hers are true and his are not.  I enjoy very much how Theorin enthusiastically jumps about in her role.

All the fun parts of this opera are in this act.  The Rhein maidens are back, and they are covered in plastic bags full of garbage.  Siegfried enters and I'm booing. He's carrying a military style rifle which the maidens take from him.  Perhaps none of them can rule the world with the ring because they haven't renounced love.  It's harder than you think. The bad acoustics at the San Francisco Opera House are all too apparent in this recording.  They give him back his gun and he goes off.

One both hates and loves Daniel Brenna's Siegfried.  One loves the singer and hates the character.  One is no longer charmed by his egotism.  I'm shouting at the screen "You f**d up buddy."  Hagen, Gunther and Siegfried are together.  Hagen gives Siegfried a potion to reverse the other one, and he tells the story of Brünnhilde in the ring of fire.  That means he lied when he swore he didn't know her.  So Hagen kills him.  The big discovery of this Ring cycle was Andrea Silvestrelli as Hagen.  Magnificent.

For the ending we return to Gutrune with Siegfried's body.  When Hagen tries to steal the ring from Siegfried's dead hand, S raises it in the air and Brünnhilde appears.  It works out as it should.  My favorite thing is Brünnhilde gets to be Brünnhilde again.  Big finish.  I'm crying.  The sheet of gold is back where it belongs.  It's all about women now.  A great ending.

We loved Donald Runnicles, and it's great to see him again.