It is the most like looking at photographs by Richard Avedon. As with Avedon, the people chosen for immortality are not rich or famous. Avedon simply lined up ordinary people in a makeshift tent with carefully positioned lights and took pictures. Caravaggio is like that.

There are books about Piero where the authors speculate over which famous persons are portrayed on the right side of the flagellation, but we know that the faces in Caravaggio paintings were not famous. I am curious that several faces are identified as self-portraits. The green-faced Bacchus is one of these. But usually the people in the pictures--one almost says photographs--are just his friends and acquaintances. One madonna was known to have been a prostitute. I think it's the one I saw yesterday at Sant'Agostino. I wonder how they know which ones are self-portraits.

It is speculated that Caravaggio used the camera obscura, mainly because the pictures so closely resemble photographs. There is no struggling with perspective--it's perfect every time. And everyone seems to be left handed. And they don't seem to be occupying the space together, but seem painted individually. It's possible, but even with the camera obscura he still had to paint the picture. The secret must be in the gift of seeing. 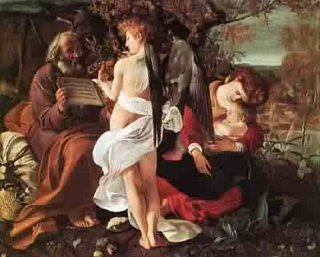 He seems to have painted almost exclusively at night with carefully positioned lighting, like Richard Avedon. Nothing looks like a painting or like anything painted before. Except the "Rest on the flight into Egypt" which could have been painted out of doors. I think I love it best. Was there ever a more beautiful madonna? Or a sexier angel? The angel has not bothered to memorize the music, perhaps has never played the violin before, but the music is sublime.

In the earliest pictures he seems to have taken a friend, given him a glass of wine, strung vines around him and painted a Bacchus. Just because he could, because he had nothing else to do except get drunk and fight.

So why do we love him, this drunken bastard, so much more than the sensible ones--because they look and feel like people we have met before.
Posted by Dr.B at 9:55 AM

Email ThisBlogThis!Share to TwitterShare to FacebookShare to Pinterest
Labels: All Travel, Art, Europe, Italy, Not Opera