I Puritani in HD 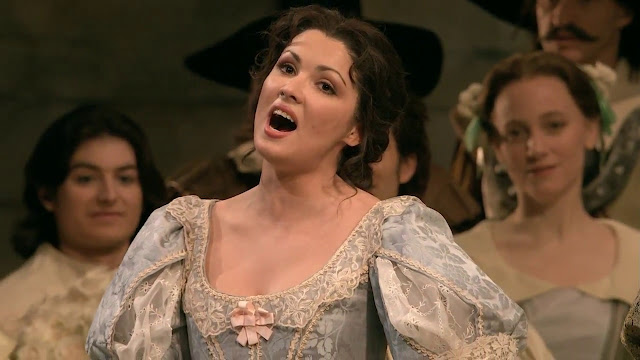 They brought out the big guns for this Metropolitan Opera broadcast of I Puritani. We had Beverly Sills cracking wise ("The tenor role is so high only a dog could sing it.") We had Renée Fleming interviewing Anna Netrebko not once but twice. Anna made faces to show what she does not do for the television cameras. She graciously complemented Renée for her work in Bellini's Il Pirata earlier in the season. Renée could interview for a living.

I am pointing this all out so A will be envious of us movie theater attendees. We got lots of closeups of Anna who looked fabulous, as always. The down side was the sound was too loud and the brightness was a bit low.  I looked for A in the audience but didn't see her.

Since Flute was sold out, they moved us into a larger theater in the same complex. The technical delivery mechanism is clearly imperfect. We'll have to see. The sound went bad on occasion--once in the middle of the mad scene. It would be desirable if adjustments could be made in the receiving theater--we were assured that this was not possible.

We are pleased to report that the production included the by now already traditional bit of Anna standing on the furniture (bench in the mad scene.) She also lay down on the floor and hung a bit into the orchestra pit for a while. Beverly Sills talked of standing and singing, but Anna is never allowed to do this. She must run wildly from place to place so people can complain that she sounds short of breath. I have never seen such an athletic opera singer or one from whom so much athleticism was expected.

The plot of I Puritani isn't much. Elvira, a puritan, loves Arturo, a cavalier, and everything is set for their wedding when Arturo discovers that the Queen is hiding in their midst and decides he will rescue her instead of getting married. Elvira thinks the worst and goes mad. It's an excuse for a mad scene, the glory of bel canto. Everything ends happily.

The costumes were prettier than the ones in Opera News, but made no sense. Anna looked lovely. One always wishes to see what she will do. Her singing was also lovely.

The tenor, Eric Cutler, winner of the 2005 Richard Tucker Award, did not quite achieve Rubini, but the insanely high notes were reasonably well done. He must have been hard to find. He was nice to see and hear, and looked well with Anna.

They stood for Anna.
#ad

Here in Denver we had 75 people in a theatre built to hold about 220, so there was plenty of room to spread out. I agree that the sound was too loud, although more obvious during the interviews than the singing. We did not have any sort of sound interruption in the music, so perhaps that was a localized problem? I thought that Cutler sang very well, especially considering the difficulty of the role. Relyea (the bass) was excellent, but he does that weird left-side-of-the-mouth singing that can be distracting -- especially on closeups. Of course, Anna was superb. BTW, "Pirata" was part of the 2002-03 Met season. I'm goign to skip the Tan Dun but anxiously await "Eugene Onegin" with Renee.

not a chance of making me jealous... not a chance! really if only you knew how cool
Saturday was!!! caught all the interviews too on the Met's flat screens. btw, Met program said this will be broadcast on PBS on February 17th.
-A